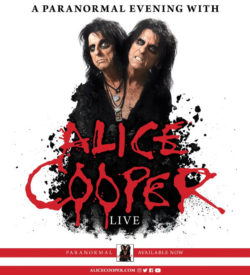 A Paranormal Evening with Alice Cooper

First off, let me just say that if you get an opportunity to see a concert performance at the Kauffman Center in Kansas City you should absolutely do so…..it is fast becoming my favorite venue to see concerts.

I have always been a casual fan of Alice Cooper and the “hits.”  I admit I really didn’t know many of the album songs….ones long-time fans know, but for this show, it didn’t seem to matter.   I really enjoyed every minute of the entire playlist.

Opening with a non stop barrage of Brutal Planet, No More Mr. Nice Guy, Under My Wheels and Billion Dollar Babies, you could tell this was going to be an awesome night.   As promised, this was to be “ A Paranormal Evening” and the stage set delivered….ghoulish and dark….strange, frightening elements filled the space, everything from small doll sized things….a large box, from which minions provided several props to Alice throughout the night, including a dancing demonic creature, a shocking electric chair and, of course, a guillotine, which eventually was used for the beheading of Cooper, to the screaming delight of the near capacity audience.

The song Lost in America is now one of my favorites….this was one I hadn’t heard before. Same with Woman of Mass Destruction.  How could I have missed those over the years?

Poison…..Feed My Frankenstein….even a bit of a slow down for Only Women Bleed didn’t drop the level of energy of the band, or the level of love from the crowd for this 70 year old Godfather of Shock Rock.

There were a couple of “rest periods” when Alice exited the stage for the obligatory solos by members of the band….every one of them very entertaining and capable on their instrument.  A special shout-out to Nita Straus, kicking ass on lead and rhythm guitar while providing backing vocals.

Wrapping up the show with I’m Eighteen and the confetti filled rousing rendition of School’s Out left my ears ringing and my heart filled with joy.  I had finally experienced Alice Cooper, clearly not in his prime, but certainly still able to deliver a killer performance.