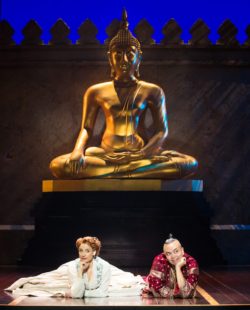 I can imagine it’s pretty hard to write a Broadway musical.

In 1943, a couple of guys named Richard and Oscar took a popular novel and turned it into one of the most popular musicals of all time; “Oklahoma!”  They followed it up with “Carousel,” “State Fair” and ‘South Pacific.”  Four hits in a row.  What would Mr. Rodgers and Mr. Hammerstein come up with for their next show?

Our story begins with Anna Leonowens (Elena Shaddow) aboard a boat with her son, Louis (Ryan Stout).  They have traveled from England to visit the court of the King of Siam, where Anna has been employed as the new teacher for the King’s wives and children.  Both mother and son are taken by the pageantry that accompanies their journey to the palace, as well as the exuberance of the King (Jose Llana) himself.  The King wishes to have his country adapt more modernist attitudes, and he hopes this English teacher can help him change.  And help him she does.

“The King and I” is a show I’ve been dying to see performed live since I first saw the film in the early 1970s.  The closest I ever got was a touring production, starring Yul Brynner, that came through Baltimore in the mid 1980s.  Sadly, I didn’t get to see the show, but I later did eat in the same Chines restaurant made popular by the fact that, when Brynner visited for dinner, somebody stole his shoes.   And, while it would have been amazing to see Brynner in his career-defining role, this new tour is equally every bit its equal.

Both leads give amazing, energized performances and I would be remiss if I did not point out that Mr. Llana makes the role of the King his own.  The supporting cast is just as good and the music….well, it’s Rodgers and Hammerstein, for God’s sake!  What’s amazing is that Rodgers and Hammerstein still had “Cinderella” (a perennial favorite on television), “Flower Drum Song” and “The Sound of Music” to follow.  Filled with familiar songs like “Hello Young Lovers,” “Getting to Know You” and “Shall We Dance,” the show is easily one of the best productions I’ve seen at Starlight in a long time.