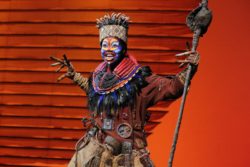 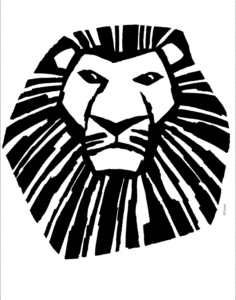 AMAZING!  That is the first word that popped into my head as “The Lion King” began.  While being mesmerized by the animated and musical Rafiki (Makelisiwe Goga), we were treated by a parade of animals down the aisle, from the rear of the theater to the stage.  Birds.  Gazelles.  Elephants.  They strode past in their proud majesty and filled the stage.  And for the next two and half hours, the excitement never died.

Based on the 1994 animated film of the same name, the story of “The Lion King” is much as it was in the film.  Some of the characters are fleshed out more and there are more songs, also written by Elton John and Tim Rice.  The characters are familiar and are portrayed in an amazing way.  While the majority of the lions just wear lion heads, other characters are portrayed by actors holding/wearing puppets.  The effect is jaw-dropping.  Even the lovable duo of Timon and Pumba are portrayed this way, a way that is not distracting in the least.

The original show, which is now the third longest running show in Broadway history, was nominated for an amazing eleven Tony Awards, winning six, including Best Musical.  I’ve been attending shows, both on Broadway and off, since 1980, and I would easily put “The Lion King” in my top 10 of best shows ever.

“The Lion King” runs in Kansas City at the Music Hall through May 27th.  For ticket information, or to see where the tour is heading next, click HERE.