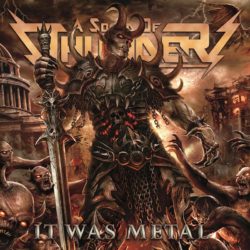 “Atlacatl” recants the legend of the titular Salvadorian folk hero and was recorded as a tribute to Osegueda’s father who hails from El Salvador.

“Obsidian & Gold (Desdinova Returns)” features a guest appearance by keyboard player Tony Carey, who in addition to a lenghty and succesful career as a solo artist and with Planet P Project, is best known among metal fans for playing on the seminal Rainbowalbums Rising and On Stage.

“Els Segadors (The Reapers)” is a reimagining of the Catalonian national anthem. It became a viral hit for the band in the aftermath of the fall 2017 Catalonian independence referendum, leading to ASoT’s first European tour.

“Tomyris” tells the true historical tale of the near Eastern warrior queen who defeated and killed Cyrus the Great of Persia in 530 BC.

“Fortress of the Future Race” is a sequel of sorts to the title track of the band’s third album Time’s Arrow.

The band launched a Kickstarter crowd-funding campaign for It Was Metal on Friday, September 22nd with a funding goal of $30,000. The campaign raised over $22,000 in the first 24 hours alone. The campaign ultimately raised $66,246, making it the most successful campaign by a metal band ever on Kickstarter. A SOUND OF THUNDER has become well known as a pioneer of crowd-funding, with over $166,000 raised by its fans to date across several campaigns, making it the most funded metal band ever on the Kickstarter platform.

After a successful collaboration with comics publisher Valiant Entertainment on the dark concept album Tales from the Deadside (based on Valiant’s Shadowman comics) in 2015, and the fan-club exclusive covers album Who Do You Think We Are? in 2016, A SOUND OF THUNDER returns to a faster, traditional metal style with It Was Metal.

Guitarist Josh Schwartz shares his thoughts on the album: “This album is fast, powerful, and catchy as hell.  In short, it’s heavy metal rocket fuel! We are confident it’s going to be a fan favorite. We delved into a darker, more atmospheric sound on the last couple of albums. We set out to do something different this time. The mission statement was to write fast, heavy, catchy songs that are fun to play and fun to listen to. I think we’ve accomplished that goal and then some. This is an album meant to be blasted in your car while you speed down the highway at 100mph singing along at the top of your lungs.”

According to vocalist Nina Osegueda, the album includes “some of the most fun, inspired, adrenaline inducing music we’ve ever written and I can’t wait to play it live.”

The It Was Metal graphic novel features original comic stories by top comic talent from Marvel Comics, DC Comics, and Valiant Entertainment. Original stories based on each song from the album take fans on an audio-visual journey that is greater than the sum of its parts. Tales of science fiction, horror, fantasy, and history combine with A SOUND OF THUNDER‘s unique brand of metal music for an unforgettable experience.

It Was Metal is available for pre-order now at all digital music outlets. CD, vinyl, and paperback book formats are available for exclusive pre-order at the band’s website, www.asoundofthunderband.com.