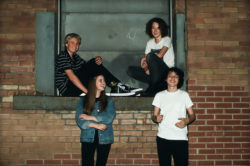 Calpurnia’s story is how teenage rock dreams are meant to unfold: four friends, all raised on a healthy diet of the Beatles, Nirvana and David Bowie, and a deep love for their respective instruments, retreat one day to a basement and begin jamming together. They cut their teeth on some cover songs and then, with just enough confidence and a dose of adolescent enthusiasm, they write and record their own tunes. And the results are nothing short of stunning. “It was kind of destined to be,” Finn Wolfhard says of the almost serendipitous genesis of the rough-and-tumble Vancouver-based indie-rock foursome he formed with three of his now-closest friends. “We all just really clicked. And when I’m passionate about something,” the singer-guitarist adds of Calpurnia, who this spring release their self-titled debut EP via Royal Mountain Records, “I like to get it done as quickly as I can. There’s not a lot of wasting time. I love just going for it. Go big or go home.”

Today, the band has given us a taste of what is to come from their debut EP which was recorded in Chicago this past November with Twin Peaks’ frontman Cadien Lake James serving as producer. The video for “City Boy” was directed by Josiah Marshall, bassist from Whitney, who captured the band while they were making their record.

Calpurnia will be touring this summer in support of the EP including the recently announced Royal Mountain Music Festival at Raspberry Farm in Ontario where they will share the stage with Mac DeMarco, U.S. Girls and more.

More on Calpurnia….
The band – which in addition to Wolfhard includes lead guitarist Ayla Tesler-Mabe, a six-string prodigy whose bedroom-shredding viral videos have earned her legions of fans on social media, bassist Jack Anderson and drummer Malcolm Craig – all grew up within walking distance of one another. But it took Wolfhard – best known as one of Hollywood’s hottest young actors thanks to his role as Mike Wheeler on Netflix’s hit series “Stranger Things – meeting Craig on the set of Canadian punk rockers PUP’s “Guilt Trip” music video for things to finally spring into motion. In short order, the pair met Tesler-Mabe at a music summer camp, and she quickly introduced them to Anderson, her close childhood friend and bassist. “And as soon as we started rehearsing it was just insane,” Anderson says of the quartet’s instant personal and musical chemistry. “It was kind of unbelievable. Like a gift.” Once they played their first official gig together, it was a done deal. “We had all the adrenaline we needed,” Craig says. Where they’d previously played cover songs, “after the response we got,” Craig notes, “we were like, “Let’s record some of our own music!””

For more info on Calpurnia checkout their Facebook Page at https://www.facebook.com/Calpurniatheband/