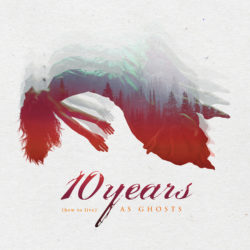 10 Years continues the heavy touring schedule that began with their return to the scene in support of the band’s latest studio album (how to live) AS GHOSTS. The lead single “Novacaine” has been a smash at active rock radio, across streaming platforms globally, and on video domains like YouTube where the official video has been viewed over 1.1 million times (https://www.youtube.com/watch?v=1glGnGOpf6c), The album marks the return of Brian Vodinh (guitar / drums) and Matt Wantland (guitar), and is their sixth full-length studio release, Produced by Grammy Award winner Nick Raskulinecz (Alice in Chains, Foo Fighters, Deftones, KoRn, Mastodon), the repertoire has been celebrated by fans and critics alike. On release, singer Jesse Hasek shared, “It’s funny. I named our last record From Birth to Burial (2015) because I thought it was our final record. It just didn’t feel like 10 Years without Brian and Matt, and having them back is really a reunion of the core writing team. This new record actually feels like a real rebirth for the band.”

The deep connection to these songs that is emerging from the fan base reflects the directness singer Hasek took with his lyrics. He shares, “In the past, I’ve written a lot of songs that were pretty ambiguous. But on this record, I’m comfortable being direct and talking about things that are important to me now. I’m older and find myself reflecting on the world more, especially after having traveled the globe. I’ve crossed paths with a lot of people, and perspectives shared have been enlightening for me as I look at The World. I see what’s going on around me. All the political, social, and religious turmoil, it had me thinking about how many people are judging and preparing for death, but are actually missing life. And, instead of using spirituality for good, a lot of people use it to point fingers and judge. Instead of worrying where we end up in the end, we need to focus on the now and the humanity.” Since release, the band has toured with Vodinh on guitar, Chad Huff on bass, and Kyle Mayer on drums. Vodinh reflects, “We’re bringing it back to the way it should be. It feels great to be back with these guys and we’re in such a good place musically and creatively.”

* Shinedown, In This Moment, One Bad Son
! Breaking Benjamin