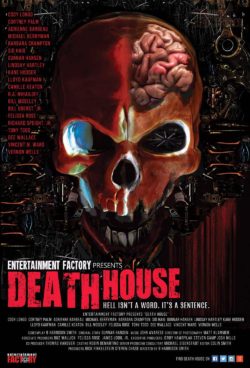 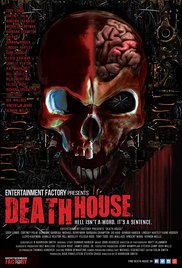 Now if you are a true horror fan you should be losing my mind now! Am I right?These are absolutely legends in the business…and they ALL appear in the film “Death House” from writer/director, H. Harrison Smith. I have been following this film for years now as it was being called The Expendables of Horror! Well after finally getting a chance to see this film, I am happy to say that this film does not disappoint. “Death House” IS the Expendables of Horror! 90 minutes of non-stop genre fun! I found myself glued to ever scene!

Here is the official premise: “During an exclusive tour, a power breakdown inside a secret prison known as the Death House sends two agents fighting through a labyrinth of horrors while being pursued by a ruthless army of roaming inmates. As they fight to escape, the agents push toward the lowest depths of the facility where they learn a supernatural group of evil beings are their only chance for survival”.

“Death House” is based on an original idea from Gunner Hansen (“The Texas Chainsaw Massacre”). Being a hardcore horror fan, this film is a blast. Every scene you will see a new friendly face. The only thing holding this film back is lack of funds, otherwise this is sure to be instead cult classic. “Death House” doesn’t disappoint on the gore and packs some impressive practical effects. It also has humor matched with some solid suspense and a great score. You can tell that writer/director B. Harrison Smith is a horror fan just like us! He injects a fresh new life into the horror genre, while setting up a new franchise in the process. Prequel is in the works already! Read our interview here with writer/director B. Harrison Smith here!

Even though this film is filled with horror icons, the film is led by great new talent like Cody Longo and Cortney Palm, read our interview with her here. Cortney is a great actress and she deserves much more attention in Hollywood. We also had a chance to interview horror icon, Dee Wallace, and you can read it here. She is great in the film as  Dr. Eileen Fletcher.  Kane Hodder also kick some major ass as Sieg.. Hodder also has the new film, Victory Crowley, (aka “Hatchet 4”) this month! He is on fire in 2018!!

If you want to prove your role as a horror fan, you need to support this film and spread the word! “Death House” is breaking the odd and getting a limited theatrical release starting February 23rd in Regal Cinemas and Cinemark theaters across the country. Check their Facebook page to see if it is playing in a theatre by you…and if it is go see it!! You got to give it to the production company behind, “Death House”, Entertainment Factory for being behind this film. You can tell that this is a real labor of love, a lot of hard work went into this film and it deserves recognition. Films like this do not get theatrical release and yet they deserves it.  It’s not perfect but it is fun and made by a horror fan FOR horror fans!