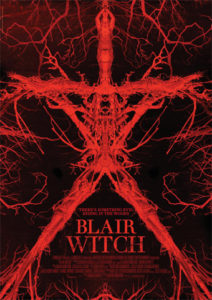 It’s been nearly two decades since a pair of aspiring filmmakers put together a cinematic game changer. “The Blair Witch Project,” a found footage film based on a made-up urban legend involving a supernatural witch in small town America, spurred late 90’s fandom and early Internet hysteria. Now the Blair Witch has entered the digital age. It’s no longer trapped in the Circuit City video camera age with a $22,000 budget. It now has drones, Bluetooth headset cameras, and $5 million to play with. And maybe that’s why it has inherently lost a lot of its horror charm and bite.

James (McCune) is the younger brother of Heather, who went missing back in “The Blair Witch Project” 20 years ago. James believes that a Youtube video of newly found footage may be the key to finding his long lost sister. So with the help of some friends, mainly documentarian and film school student Lisa (Hernandez), he travels to the Black Hills. Despite early eerie vibes, “Blair Witch” has is already having to retread familiar paths to establish its atmosphere.

Upon arrival in sleepy Burkittsville, James and his group meet Talia (Valorie Curry) and Lane (Wes Robinson). The two Burkittsville residents, whom straddle the line between white trash and goth metalheads (or are those the same thing?), are the ones who found and uploaded the Youtube footage. Their infatuation with the Blair Witch legend is a mixture of respectful fear and fanboy excitement. With Talia and Lane forcibly in tow, the group heads into the woods in the hopes of finding whatever bizarre phenomenon inhabits the creepy Maryland woods.

It’s difficult to sum up “Blair Witch” into a few simple words or a pithy comment. It flips on a dime midway through, going from the familiar slow burner that made the first one so memorable, to a nonstop jump scare haunted house. The first 30 minutes pays homage to the style of the original, leaving supernatural breadcrumbs for the cast to find. The tone pivot comes when the group has to stay a second night in the woods after predictably getting lost and divided.

Adam Wingard and crew, who’ve done previous other horror movies together (and very well I might add), show signs of adoration for the original. But in an attempt to make their own distinct vision, they may have trampled all over what made the original unique. The “found footage” has been edited from about a dozen different camera sources with some scenes clearly not being from any of the recording equipment on hand. They also expand upon the mythology, giving God-like powers to the witch. The over saturation of the witches new powers, gore, and predictable jump scares certainly cheapen the mood.

As for the jump scares, nearly every other one is unnecessary and come nearly every 30 seconds in the movie’s climax creating a blunt force experience that will either nauseate or thrill. While certainly stimulating to watch in theaters, the jump scare bombardment grows tiresome. At times I felt like I was watching a full screen version of “Five Nights at Freddy’s” on amphetamines. Outside of the repetitive first-person terror, “Blair Witch” finds inspirational moments. There are scenes that are cleverly claustrophobic and discomforting.

“Blair Witch” is a bold endeavor that may have been more respected if it wasn’t in the shadow of a 1999 movie that did so much with so little. “Blair Witch” is an expensive fanboy movie made by a genuine fan of the original. I have tip my hat to Wingard and crew for being ambitious with this sequel/reboot, and not being afraid of trying something new with old material. But I can’t help and think that “Blair Witch” should remain a cinematic relic.