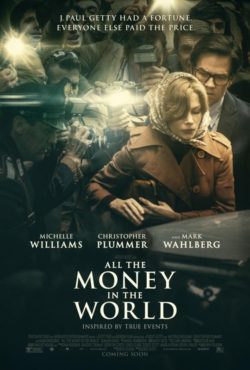 Media Mikes has teamed up with their friends at Sony Pictures to give (25) of our readers and a guest the chance to be among the first to see the latest film from acclaimed director Ridley Scott, “All the Money in the World,” at an advance screening to be held on Monday, December 11, 2017 at the AMC Studio 30 in Olathe, Kansas.

The film, starring Mark Wahlberg, Christopher Plummer and Michelle Williams tells the story of the 1973 kidnapping of John Paul Getty III, whose grandfather, one of the richest men in the world, refused to pay the ransom.  The screening will begin at 7:00 pm.

The first (25) readers to do so will receive a pass for (2) to attend the screening.  This is a first come/first serve giveaway.  Once the allotted number of passes have been claimed the giveaway is over.  Good luck!

“All the Money in the World”

ALL THE MONEY IN THE WORLD follows the kidnapping of 16-year-old John Paul Getty III (Charlie Plummer) and the desperate attempt by his devoted mother Gail (Michelle Williams) to convince his billionaire grandfather (Christopher Plummer) to pay the ransom.  When Getty Sr. refuses, Gail attempts to sway him as her son’s captors become increasingly volatile and brutal.  With her son’s life in the balance, Gail and Getty’s advisor (Mark Wahlberg) become unlikely allies in the race against time that ultimately reveals the true and lasting value of love over money.