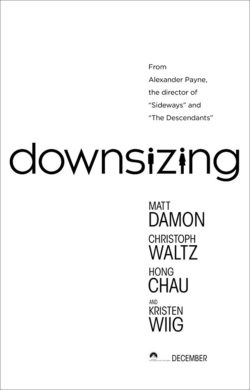 Media Mikes has teamed up with their friends at Paramount to give (25) readers and a guest the chance to be among the first to see the latest film by Alexander Payne, “Downsizing.”

The film, starring Matt Damon, Kristen Wiig and Christoph Waltz, will be screened on Monday, December 18, 2017 at the Cinemark Palace on the Plaza in Kansas City.  The screening will begin at 7:00 pm

All you have to do is click HERE.  The first (25) readers to do so will receive a pass for (2) to attend the screening.  This is a first come/first serve giveaway. When the allotted number of passes have been claimed the giveaway is over.