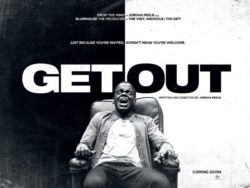 GET OUT, writer/director Jordan Peele’s darkly funny horror film and CALL ME BY YOUR NAME, the story of a young boy who meets a visiting American while on vacation with his family, took home the lion’s share of prizes as the Kansas City Film Critics Circle handed out their 52nd Annual James Loutzenhizer Awards for the best in film for 2017.  Media Mikes writers Mike Smith and Jeremy Werner are members of the group.
GET OUT took home the prize as the Best Film of 2017.  In addition, Jordan Peele won for his Original Screenplay and the film was also named the winner of the Vince Koehler Award as the year’s best Science Fiction/Horror/Fantasy film.
CALL ME BY YOUR NAME earned recognition for Timothée Chalamet, who was named Best Actor as well as for it’s Adapted Screenplay, written by James Ivory (based on the novel by Andre Aciman).  The film also received the groups Dr. Tom Poe Award as the year’s best LBGT film.  The film shared the Adapted Screenplay award with LOGAN, written by Scott Frank, Michael Green and James Mangold, based on the popular Marvel Comics character.
Guillermo del Toro was named winner of the Robert Altman Award as the year’s Best Director for THE SHAPE OF WATER,  which also won the Best Actress award for Sally Hawkins.
The Kansas City Film Critics Circle is the second oldest film critics group in the country, founded in 1967 by Dr. James Loutzenhizer.  The group’s annual awards were named for Dr. Loutzenhizer after his passing in November 2001.
Here is a complete list of winners:
BEST FILM –  GET OUT
ROBERT ALTMAN AWARD FOR BEST DIRECTOR – Guillermo det Toro, THE SHAPE OF WATER
BEST ACTOR –    Timothée Chalamet – CALL ME BY YOUR NAME
BEST SUPPORTING ACTOR –  Willem Dafoe – THE FLORIDA PROJECT
BEST ACTRESS –  Sally Hawkins – THE SHAPE OF WATER
BEST SUPPORTING ACTRESS – Laurie Metcalf – LADY BIRD
BEST ORIGINAL SCREENPLAY –  Jordan Peele – GET OUT
BEST ADAPTED SCREENPLAY –  James Ivory – CALL ME BY YOUR NAME/Scott Frank, Michael Green and James Mangold – LOGAN
BEST ANIMATED FEATURE –  COCO
BEST FOREIGN LANGUAGE FILM –  IN THE FADE (Germany)
BEST DOCUMENTARY FEATURE –  JANE
VINCE KOEHLER AWARD –  GET OUT
DR. TOM POE AWARD –  CALL ME BY YOUR NAME
Filed Under: Film Headlines, Movies Tagged With: awards, circle, city, critics, film, kansas, ...