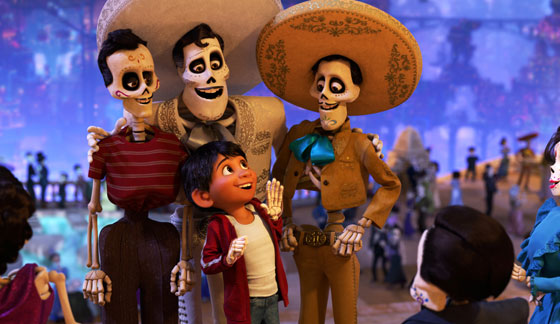 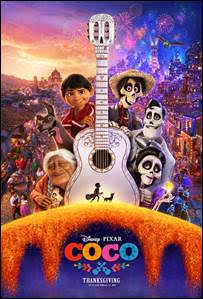 Death and life after death are incredibly tricky subjects to maneuver for filmmakers in the animated-children’s movie genre. When making a family friendly film about the passing of a loved one and what waits beyond in the afterlife, you run the risk of not only upsetting children, but also their parents for how you’ve delivered your content. To say Pixar has done it again is an understatement because they’ve seemingly handled the subject matter with ease.

Miguel Rivera (Gonazalez) is an aspiring musician, trapped in a family that has barred music from the household. The Riveras are a shoemaking family because Miguel’s great-great-grandmother started the practice as a way to prove her own independence after her husband abandoned the family to pursue his musical dreams. Hence this is why artistic pursuits in music are frowned down upon, even to the point where Miguel’s grandmother smashes Miguel’s makeshift acoustic guitar after finding it in his secret room/shrine dedicated to popular singer-songwriter, Ernesto De La Cruz (Bratt)

Despite those attempts to dismay Miguel, he develops suspicions that he’s related to his idol Ernesto and enters the Mexican singer’s enshrined tomb on Dia de Muertos (The Day of the Dead). Believing that he’s simply borrowing a long lost relative’s heirloom, Miguel steals Ernesto’s guitar. But instead he’s committing an unspoken cardinal sin that isn’t grave robbing. He’s transported to the afterlife where he meets his long deceased relatives and discovers unspoken family secrets long forgotten.

There’s a lot of moments where “Coco” could have easily coasted on spectacular visuals and charming characters, but instead Pixar does what it does best, surpass expectations and craft a unique and heartwarming vision. The animation studio also manages to package its themes of perseverance, family togetherness, forgiveness and following your dreams, all in a cohesive message that’s easily consumed for parents and kids alike. “Coco” immerses audiences in a culture and tradition that speaks universal truths.

The music, which will surely win an Oscar, by Robert Lopez keeps tempo with the animation pushing audiences into fresh colorful territory, but also bringing audiences back down to Earth during the film’s most subtle moments. The man whose done music for everything from “Frozen” to “The Book of Mormon” makes another catalogue of music that’s seemingly timeless, fitting Pixar’s effort’s to make “Coco” an instant classic, worthy of standing atop their growing catalogue of masterpieces.

“Coco” takes a while to get going, but once it does, it manages to hit every high note along the way. It may not be as clever as “Inside Out” or groundbreaking as “Wall-E,” but it finds a way to wedge itself into contention with many of Pixar’s great because of its expert use and understanding of the Mexican heritage that it uses as a plot device and backdrop. It’s a movie that not only enlightens some about a specific culture, but makes audiences feel like one of the family. And for those who’ve ever dealt with the loss of a relative, you’ll find the ending equally heartbreaking and endearing.