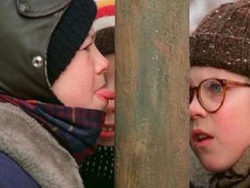 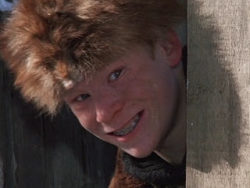 It’s no secret that we at Media Mikes LOVE the film “A Christmas Story.” Mike G. is friends with both Ian Petrella (Randy) and Yano Anaya (Grover Dill). One of the best dinners I ever had was with Yano in Las Vegas and if you’re ever in Cleveland, you should visit the “Christmas Story” house (the one they used in the film). I mention all of this because, once again, our good friend and noted film historian Bruce Crawford has outdone himself by announcing that his 41st Tribute to Classic Film will be the 1983 holiday classic “A Christmas Story.”

The film will be screened on Friday, November 10, 2017 at the beautiful Joslyn Art Museum, 2200 Dodge Street, in Omaha, Nebraska and will begin at 7:00 pm. But wait – there’s more. No film is ever presented unaccompanied. This year, the 25th for the event, the screening will be proceeded by appearances by actors Zack Ward, who played bully Skut Farcas, and another long time friend of the Mikes, Scott Schwartz, who played the unfortunate flag pole victim Flick. The two will introduce the film, answer questions from the audience and sign autographs after the showing.

Tickets for the event are $24.00 and can be purchased at the customer service counters of Omaha-only Hy Vee food stores. Proceeds from the event will benefit the Nebraska Kidney Association.