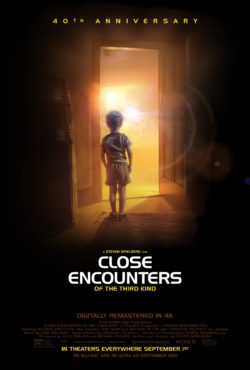 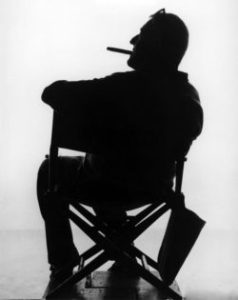 To me, the late 1970s and early 1980s were the best time to go to the movies. Not that the films then were better then what we have now, but that the experience was.

When I was in high school/college there wasn’t a movie theatre on every other block. And there were very few multiplexes. Four screens was a huge complex….six was almost unheard of. Now it’s not unusual to find two 24 screen complexes a few miles apart. Going to the movies was an adventure! If you were to ask me about a movie I saw between 1975-1984 I’m pretty sure I could tell you the theatre I saw it at as well. That’s how special the experience was for my friends and I.

This afternoon my wife and I went to see the 40th Anniversary Presentation of Steven Spielberg’s classic “Close Encounters of the Third Kind.” As a die-hard “Jaws” fans, I was dying to see it. As were many of my friends, who had fallen in love with “Star Wars” over the summer and looked forward to another science-fiction classic.

Our group – about six of us that did everything together – would go about seeing a movie two different ways. If it was a new film that we wanted to see but didn’t seem like it would be overrun by crowds, we just all got together at the theatre, bought our tickets and watched it. However, there were certain films that we knew from the build up would be packed (“Superman: The Movie,” “Jaws 2”) so we had a plan laid out for those. As “Close Encounters” opened while school was still in session, it fell on one of us to gather everyone’s money at school on Friday and then, when school was out, to race to the theatre, get in what was presumably a long line and buy tickets to the next available show. After the tickets were secured, he would call one of us from a payphone in the lobby to tell us what show he had gotten seats for. If we were lucky that he was able to snag seats for the 5:00 show, he would get in line and we would join him. His reward for his efforts was that his popcorn and soda were paid for by the rest of us. 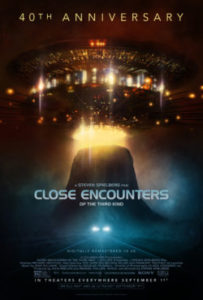 On this afternoon, even though he had gotten to the theatre before 4:00 pm the only show that still had seats was the one beginning at 10:00 pm. This allowed him to go home and change. We would then meet up somewhere for dinner out and then head to the theatre, arriving no later than 2 hours before showtime, where a line was, or was about to be forming for the 10:00 pm show. This is when the fun would begin. You had two hours to talk about movies with your friends and, more importantly, with the other 900 people that would be lining up with you You did your best not to listen too closely to the people that were coming out of the 730 pm show, worried that somehow you would hear a spoiler. One time, as our group left a showing of “The Best Little Whorehouse in Texas,” my friend Matt said, very loudly, ‘I can’t believe Burt Reynolds died in this!’ He doesn’t, but for those who did not heed our advice about listening, you kept waiting for the part where Burt dies until, as the credits rolled, you realize that Matt was messing with you. Another time our group drove to Orlando from Tampa to see “The Empire Strikes Back” in 70 mm on opening day. As we left our driver, John Hooper, picked up his CB radio microphone and announced to the long line inf front of the theatre that Darth Vader was Luke’s father. Thankfully that was the last time we ever went to Orlando to see a movie.

I thought about all of this as we bought our tickets this afternoon. We got to the theatre at 3:00 for the 3:15 show and discovered only two people in line ahead of us. At a 28 screen complex there were two people in line ahead of us. The auditorium was one of the fancy ones where you have to choose your seats at the box office. We made our choice and joined the other eight people in the auditorium. I wondered if we sat in seats other then the assigned ones we purchased if anyone would make us move.

The film started with a nice little featurette on the film’s 40th Anniversary then the old-time Columbia Pictures logo filled the screen. I sat, much like I did 40 years ago, on the edge of my reclining seat, taking in every frame of the film. The film was beautifully restored and was the version I had remembered as a teenager. No “Special Edition” hijinx here. “Close Encounters” was the first film I ever applauded when it ended. Not applauded like after James Bond kills the bad guy or when the shark blows up in “Jaws.” I remember as if it were yesterday sitting in our seats, dumbfounded at what we had just seen. As the music soared the words “A Steven Spielberg Film” hit the screen and I applauded because I had just been moved for the first time by the true power of film. I was not the only one to applaud that night…it seems as if the entire auditorium shared my sentiments.