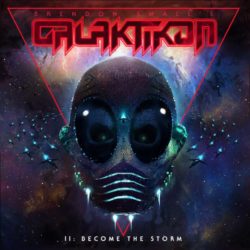 Dethklok mastermind Brendon Small returns with part two of his interstellar space saga titled “Galaktikon II: Become the Storm”. Continuing on with the space-age themes of 2012’s original “Galaktikon” album, “Become the Storm” is a heavier, darker and more brutal sound. In addition to Brendon Small and Grammy-nominated producer/engineer Ulrich Wild “Galaktikon II: Become The Storm” features the distinct rhythmic powers of drum legend Gene Hoglan and bassist extraordinaire Bryan Beller. With uncapped time and creativity on their side, the aforementioned artists have created a heavy metal opus that Dethklok fanatics will covet and newcomers will add to the top of their playlists.

After a five year wait fans of Dethklok creator Brendon Small have something new to fill their ear holes. “Galaktikon II: Become the Storm” instantly pickups up where the albums predecessor left off. From the thunderous attack of the opening track “Some Days Are For Dying” to the hauntingly eerie “The Ocean Galaktik” which features Small’s departure from his signature gritty growls to an almost crooning like style which certainly adds to the tracks uniqueness. Closing out the album were probably my two favourite tracks from the release. “Could This Be The End” is a blending of heavy metal styles which almost sums up the creators musical range in one singular track and the instrumental “Rebuilding A Planet” which is very much in the progressive style of Steve Vai or Joe Satriani but with Small’s own unique approach making for a really enjoyable listen.

“Galaktikon II: Become the Storm” is a fitting follow-up to its predecessor. The album contains ample amounts of signature Small and his assembled crew of musicians as they traverse deeper into the “Galaktikon” universe. You never know where the next track will take you as it twists and turns over the fictional universe which makes for an exciting listen defiantly worth checking out.