Legendary Hanoi Rocks singer and solo artist Michael Monroe is set to release “The Best” a 2 disc retrospective compilation showcasing tracks from the Finish rockers 10 album solo career along with a handful of unreleased tracks and a new single. Media Mikes had the chance to speak with Michael recently about the release and also about the work he and his band are doing for their next studio album.

Adam Lawton: Can you tell us about your new collection release titled “The Best” and how you went about selecting which tracks from your catalog would be included?

Michael Monroe: There was a time limit to get everything figured out so basically what I did was choose two songs from each of my solo releases. I did choose to include 4 songs from “Demolition 23” as that material has not been available for almost 20 years now. From that record alone we included “Nothings Alright”, ”Hammersmith Palais”, “You Crucified Me” and “Deadtime Stories” which is a very special one. That song is dedicated to Stiv Bators and the lyrics and everything are in homage to him. A lot of the songs that appear were originally released as singles with accompanying videos. The “Nights Are So Long” album didn’t have either of those so I chose “It’s A Lie”. The version included on this compilation was originally recorded in 1985 and features a duet with me and Stiv. This was done right around the time that I was thinking of starting a solo career. It previously had only been released as a bonus track in the States and Germany with the “Piece of Mind” album. This is a much better version that one I did by myself for the album due to Stiv not being able to make it to the studio. That stuff is all included on disc 1. Disc 2 of the set features tracks from my three most recent albums “Sensory Overdrive”, “Horns and Halos” and “Blackout States” as well as a few other tracks including a cover of “Magic Carpet Ride” by Steppenwolf which features Slash. Slash is someone who has always been great to me and was really significant during my solo years so I wanted to include a piece of that. Ultimately fans will get a two disc set featuring 29 tracks including the new single “One Foot Outta the Grave”, 4 unreleased tracks, a handful of bonus songs and a few songs from each album. I think fans will really enjoy what we have put together.

AL: Was this material all remixed and re-mastered or are these the original versions of each song?

MM: We really didn’t do much in the way of re-mastering. We did bring 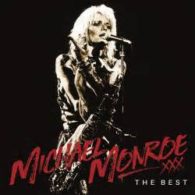 up levels on some of the older recordings and we tweaked things a little here and there so each track matched. When you’re pulling songs from different albums for a compilation like this you have to make sure they are all have a consistent sound. Svante Forsback who masters a lot of the records made in Finland did a great job with this. He wasn’t trying to make something sound like a certain era he was just out to get the best sound possible for each song.

AL: What was it like revisiting a lot of this material?

MM: I think it was a healthy thing to do. I got to look back at my career thus far and it put things in perspective for me. I think “The Best” is a really great representation of what I have done as a solo artist. It in a way was like doing an autobiography. Looking back I may not be the biggest or most famous but not everyone has to be that. As long as I have my integrity and never compromise for the wrong reasons and keep making quality material that’s all I need. I think a lot of this material really stands the test of time unlike today with a lot of things where after 20 years or so it just doesn’t hold up.

AL: Were the unreleased tracks ones that you have had for awhile or are they fairly recent compositions?

MM: We had “Fist Full of Dynamite” and “Simple Town” left over from the last album sessions. They were supposed to be used as bonus tracks before now however that weren’t needed. “One Foot Outta the Grave” is a pretty fresh song. That was recorded in February in Helsinki. The others material was stuff I had around on tape.

AL: Can you tell us about the new studio album you are currently working on?

MM: We have a lot of creative energy in this band. I have given everyone the freedom to write as much as they would like and then we pick the best material to record. We don’t let any egos get in the way. This band has been together for seven years now and we all know each other really well. Steve Conte and Rich Jones are really great songwriters. I don’t have to be the only one writing lyrics as these guys are capable of writing stuff that I instantly relate to. Depending on the situation we may write together or alone as we each live somewhere else in the world. There is never a lack of songs which makes things easy when it is time do a new record. We write then we pick the best songs and go in and record.

AL: Are there any plans for you and the band to tour this year?

MM: We are going to be doing some date in the UK in December. At the moment we’re going through a management change as in the past few years I haven’t had proper management. Hopefully by making these changes we will be able to tour more. We have done some smaller shows in the States over the past couple years but to really get noticed outside of New York or Los Angeles you have to be on one of the bigger tours. The plan is to keep doing what we are doing and hopefully we will catch some breaks. I have had some pretty bad luck throughout my career but I don’t let that get me down and am looking forward to the future.

For more info on Michael Monroe you can visit www.michaelmonroe.com