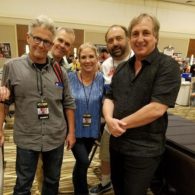 I’ve been attending fan conventions since I was 16-years-old. In those 40 years I’ve had the chance to meet so many of my favorite celebrities, from the cast of the original “Star Trek” series to such esteemed filmmakers as Martin Scorsese, John Avildsen, Ron Howard and Brian DePalma. This past weekend I had the experience of seeing a convention from “the other side of the table” when I was a celebrity guest of the Hollywood Show in Los Angeles.

Being a guest at a show like the Hollywood Show is a surreal moment. Instead of standing in line and talking to people about who you are going to meet (favorite roles, etc) there are people standing in line to talk to YOU. The show was very “Jaws”-centric, which means had I lived in LA I would have been the first one in line. Among the guests from my favorite film were Joe Alves, Carl Gottlieb, Roy Arbogast, Ted Grossman and the show’s headliner, Academy Award winner Richard Dreyfuss. As the co-author of the definitive book on “Jaws 2,” I was placed in the same row as a group of “Amity Kids” from the film: Donna Wilkes, Gigi Vorgan, Tom Dunlop, Ben Marley, Billy Van Zandt and Martha Swatek. Both Ann Dusenberry and Gary Springer were hoping to attend but cancelled, Gary having to work and Ann’s father, Bruce, having sadly passed away recently. Another “Jaws” highlight was the amazing sculpture of Robert Shaw as Quint in the fighting chair, which was created by Nick Marra. Mr. Marra also created the amazing sculpture of Roy Scheider, Robert Shaw and Richard Dreyfuss at the back of the ORCA that was featured at the 2012 JAWSFest.

But if you weren’t a “Jaws” fan there was someone there for everyone. Fans of classic television had the opportunity to meet Wally and the Beaver (Jerry Mathers and Tony Dow), Mary Ann (Dawn Wells), Barney Miller and Stan Wojciehowicz (Hal Linden and Max Gail) as well as several “Star Trek” stars, including Nichelle Nichols, Fred Williamson and Mariette Hartley. Besides Richard Dreyfuss, film fans got to spend time with such stars as Bruce Dern and Paul Sorvino. Current television was also represented, with many soap opera stars attending on Saturday. I was pleased to find that sitting directly behind me was the cast of “Mike and Molly,” with Billy Gardell’s back often ending up in the photos taken of me.

Not only were the celebrity guests friendly and generous with their time, they weren’t charging an arm and a leg. I’ve been to shows where celebrities charge a minimum of $50 just for an autograph. If you want a photo with them, it’s more. The highest priced signature here was Mr. Dreyfuss’, who was charging $40. But with that signature you could take a photo with him and, of course, chat for a few moments. Most of the guests were signing for $25 or less, meaning you had more celebrity opportunities for your dollar.

To me, the best part was when a representative of the show came to my table and escorted me to the “Celebrity Lounge,” where Goody Bags were prepared for the guests. I was taken around the room and offered everything from jewelry to bath salts, from wine glasses to hand painted chocolates. I was amused that a few of the gift representatives told me how much they enjoyed my last project and a couple even asked what I had coming up next. “Another book,” I’d reply. They would write down my name and ask to take a photo of me with their product, which I found to be an incredible boost for me ego. And I can’t help but think that somewhere is an advertisement featuring me holding up a bag of snack crackers reading, “Michael Smith LOVES ‘Rice Crisps'” (and I must admit, I did. Especially the pizza flavored ones). The next Hollywood Show in Los Angeles is coming up in October and it’s early guest list looks like it’s filled by the stars of “Hill Street Blues” and the film “The Warriors.” For information please go HERE.

All an all, the entire weekend was an amazing time for me, both as a fan and as a “celebrity.” I’ll be doing the Mid-Atlantic Nostalgia Convention in Baltimore in September. I hope the people with the Pizza Rice Crisps are there!