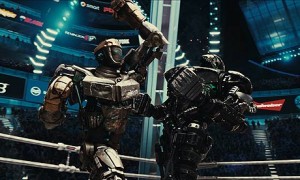 When I originally saw the trailer for this film, I couldn’t wait for it to be released…so I wouldn’t have to see the trailer anymore. After viewing it I was completely surprised at how entertaining it was after all. Hugh Jackman is definitely the action star, he knows action and he does it well. Though this film was all about the robots, they work together really well and the CGI was very impressive. The Blu-ray presentation was simply amazing. The video was super sharp and the sound boasting an amazing 7.1 surround track was unbelievable. This film definitely pushed the limits of Blu-ray’s capability and proved very impressive.

In case you don’t know the story it in short a live-action version of the board game “Rock ’em Sock ’em Robots” or at least I felt like it is. In part also it is based on the short story “Steel” by Richard Matheson (“I Am Legend”) and also the 1963 episode of “The Twilight Zone” of the same name. This is something that I was unaware of until after watching it, but it made me appreciate it quite more. The story is simple but it packs some great heart and definitely leaves you cheering and rooting for the underdog. I must also note that the film has an amazing score composed by non-other than the master Danny Elfman.

The special features are very amazing and I really enjoyed them all. Some extras are exclusive to Blu-ray such as “Second Screen: Ringside with Director Shawn Levy” adds more to the film while using an iPad but of course you first need an iPad. “Countdown to the Fight: The Charlie Kenton Story” portrays the rise and fall of Charlie Kenton’s boxing career. Very entertaining and fun! “Sugar Ray Leonard: Cornerman’s Champ” features Hugh Jackman talking about how he seeked out help from the legendary fighter. There are almost 20 minutes of deleted and extended scenes, all in HD and some with an explanation from director Shawn Levy. Some needed to be cut for timing and pacing but definitely worth a watch.

The rest of the special features are on the DVD as well as the Blu-ray disc. “Making of Metal Valley” is an informative feature on the behind-the-scenes of the film. It really shows the scale of the production. “Building the Bots” is the second featurette which focuses on the visual effects and the creating of the robots. Lastly there is a set of bloopers and delivers some good laughs and it wraps up a great disc of extras. Overall this is a must purchase on Blu-ray.