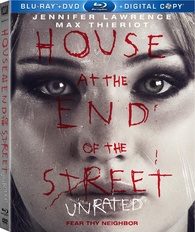 When this film came and flew threw theaters, I was shocked due to the popularity of Jennifer Lawrence from “The Hunger Games”. I am personally a fan of neither. I am also not a terribly big fan of PG-13 teen horror films but I was hoping that this would have surprised me. Well, I was completely wrong and this film fitted right into the cheesy waste-of-time lack of suspense teen wanna-be horror genre. The Blu-ray release for this film includes the theatrical cut and also a new 8-minute longer unrated cut, which adds a “shocking twist” you wasn’t shown in theaters but doesn’t help the rest of the film from sucking. I would recommend skipping both versions of this film and saving your money.

OFficial Premise: Academy Award® Nominees Jennifer Lawrence (The Hunger Games) and Elisabeth Shue star in this edge-of-your-seat horror hit packed with heart-pounding thrills and gripping suspense. Newly divorced Sarah (Shue) and her teenage daughter Elissa (Lawrence) have just moved to the suburbs for a fresh start. But their hopes quickly shatter as they learn that, years earlier, a grisly murder took place next door when a deranged girl killed her parents and disappeared. The girl’s older brother Ryan (Max Thieriot) still occupies the house, and when he befriends Elissa, his secretive past could become her worst nightmare!

“House at the End of the Street” comes as a combo pack with Blu-ray, DVD and Digital Copy included. The 1080p transfer looks crisp with no major issues even in the dark scenes. There is a decent DTS-HD Master Audio 5.1 track included as well, even though it doesn’t add any suspense. The issue I have with this release is that the film is pitched with the unrated cut but the DVD and digital copy included only come with the theatrical cut (even despite the DVD artwork showing the words “Unrated”). The special features are completely missing as well with only one extra included, “Journey Into Terror: Inside the House at the End of the Street”. I would skip this unless you absolutely loved this film.