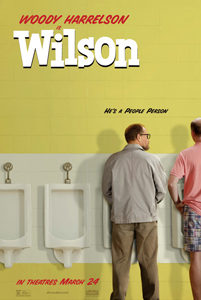 First off let me inform you that this is NOT the movie we’ve all been waiting for detailing what happened to Tom Hank’s volleyball buddy in “Castaway.” And no, I don’t think I’m the only one who was upset when I learned the news.

Everybody knows a Wilson (Harrelson). He iust goes along with his life until it’s time to do something with it. His choice is to make amends with his ex-wife, Pippy (Dern). Imagine his surprise when he discovers that, instead of being fat and frumpy, Pippy is actually quite beautiful. Beginning to believe that his luck may be changing, Wilson learns that Pippy never had the abortion she left home to have. Instead she had a baby girl and gave it up for adoption. Wilson is amazed. He has a daughter!

Carried along by a brilliant performance by Woody Harrelson, “Wilson” is based on the very dark graphic novel by Daniel Clowes. Wilson is set in his ways and can’t understand why complete strangers refuse his friendly conversation starting. As he and Pippy begin to reconcile they decide to “find” the daughter they gave up 16 years ago, which has mixed results.

If you’re looking for a quirky comedy to help your day go by, feel free to spend some time with “Wilson.”