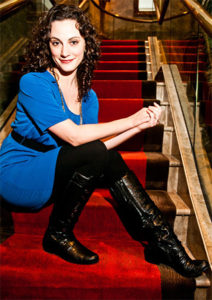 Most actors dream about the day they will finally appear on Broadway. Even if you don’t have any lines, just to be able to stand in the background for a brief moment gives you bragging rights with your friends that you appeared ON BROADWAY. Apparently nobody told Trista Moldovan that you were supposed to take it slow. The first time she hit the boards of the Great White Way she did it as Christine, the love interest of the title character in the longest running musical in Broadway history, “The Phantom of the Opera,” which just concluded it’s 12,080th consecutive performance.

Born in Cleveland, Ms. Moldovan has tackled many of the most popular roles in musical history, including Betty Haynes in “White Christmas,” Sarah Brown in “Guys and Dolls,” Sally Bowles in “Cabaret” and Carla in “Nine.” She has also flexed her dramatic and comedic charms by starring as Maggie in “Cat on a Hot Tin Roof” and Billie Dawn in “Born Yesterday.” In November 2012 she concluded a year-long run as Christine at the Winter Garden Theater in “Phantom of the Opera.” She’s now returned to the touring company of the show as Carlotta, the prima donna of the Opera company. Recently Ms. Moldovan took some time out to talk about this next phase in her career.

Mike Smith: You literally JUST finished understudying the role of Francesca in the touring production of “The Bridges of Madison County.” Two weeks later you’re in “Phantom.” How hard is it to have to basically be able to perform two different shows at any given time?

Trista Moldovan: To go from being an understudy, where you have to be able to perform at a moments notice to this (“Phantom”), where you’re doing eight shows a week, requires using two different sets of muscles. As an understudy you have to have a peripheral process as you’re learning the role because you’re also doing an ensemble track. For “Phantom” I’m very grateful to call the role my own and to be able to really make it my own as well.

MS: You played Christine on Broadway for a year and now you’re playing Carlotta. To me that seems like it would require an almost different type of singing, to go from what people would call “Broadway” singing – really belting it out – to a more operatic style. Was that transition difficult?

TM: Oh, yes. It’s definitely a different “sing” than Christine. Christine has more of a musical theater flavor whereas Carlotta is 100% operatic. She has a much more heavier sound…a much more legit sound, of course. And I had not sung like that for years, so that was very fun and very challenging to work up my chops and to work on the material. It was an amazing challenge and it’s so much fun to be able to sing like this every night because I don’t do opera. I can’t think of another role where I’d be able to sing like this. And I love it. It’s great. It’s so much fun.

MS: You have played so many iconic roles in musical theater. Is there a role you haven’t played yet that you would love to take on?

TM: (laughs) As I’m moving into a different part of my career it’s opened up a world of character roles. More comedic roles. So now my sights are set on roles like Madame Morrible in “Wicked” and, maybe in a few years, Madame Thenardier in “Les Miz.” More of the supporting, secondary roles. A couple of years ago I never thought they would be in the realm of possibility but now I’m sort of at the beginning of that part of my career.

MS: How long will you be with “Phantom?”

TM: As of right now I’m staying until the fall then after that…I don’t know, it seems like it’s an eternity away. After that we’ll re-evaluate when the time comes. But as of right now I’ll be here until October 2017.

We talked for a few more minutes and I learned that she had met her husband, actor Stephen Tewksbury, while both were doing “Phantom.” (She was Christine, he was the Phantom’s understudy). She laughed when I told her how cool that was, because finally the Phantom got the girl! “The Phantom of the Opera” plays through February 19th at the Music Hall in Kansas City. For more information or to purchase tickets, you can go here.