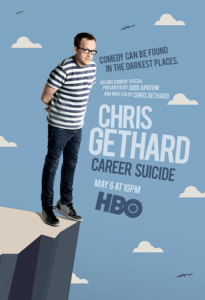 Chris Gethard is a multi-talented comedian and actor (Don’t Think Twice, “Broad City”) who’s worked extensively in NYC’s improv scene at the Upright Citizens Brigade Theater as well as having his own successful public access show, aptly titled “The Chris Gethard Show”. This weekend Gethard premiered a much more personal type of special on HBO with Chris Gethard: Career Suicide. In this touching, and darkly hilarious special, Chris uses comedy to detail his lifelong struggles with depression and anxiety including his brushes with suicide. The show held a special screening and talk-back at New York’s Tribeca Film Fest, featuring Chris, fellow comedian Pete Holmes (HBO’s “Crashing”), and moderator Ira Glass (NPR’s “This American Life”). I spoke with them on the red carpet about the development of the show and using comedy to cope with more difficult issues.

Lauren Damon: Working with Chris on Don’t Think Twice, did you see the development of his show at all?

Ira Glass: I mean, it’s funny, Don’t Think Twice…Chris is such an amazing actor. He’s so for-real in Don’t Think Twice, and that character does have a lot of overlap with who he is in real life. And who he is in this special. My main thing with the special is I’ve seen him develop it. I saw like a super early version in the basement in Union Hall, and then saw when it was up on stage. So I’m really curious how it translates to video.

LD: With the heavier themes, I feel like we have a need for that in comedy because things seem sort of dire in general…

Glass: It’s true…But I feel like the whole trend in comedy has been comedians getting super real about stuff that’s going on, you know. And I feel like when you look at the people…who are doing the most work right now, it’s like Louis CK and Tig Notaro and Mike Birbiglia, Aziz [Ansari]…You know that’s people talking about stuff that’s pretty real. Which I like because I like a real story. I think when somebody can tell a story that’s super funny but also is really a real thing, and emotional, it’s just like what could be more entertaining? That’s everything a person could want.

LD: That’s basically the best episodes of “This American Life”…

Glass: On a good day, yeah. On a good day. The formula on “This American Life” is we want it to be really funny, with a lot of plot at the beginning, then it will get kind of sad and sort of wistful at the end, then like throw a little music under it, you’re done!

In Don’t Think Twice, Gethard played Bill, a comedian coping with a hospitalized father on top of dealing with general anxieties of where he fits into his shifting improv group.

LD: In Don’t Think Twice, your character did a lot of the heavy emotional lifting, was your show already developing kind of around that time?

Chris Gethard: It’s funny because [Don’t Think Twice director] Mike Birbiglia was the one who kind of threw down the gauntlet and said ‘You should do a show about this side of yourself.’ I would talk about it to a degree in my work, but he was the one who was like ‘You got something here, go for it.’ So the experience of Don’t Think Twice and this show kind of went hand in hand. I was opening for Mike on the road, he developed the film on the road [and] during that process is when he really said ‘You should really go for it, I promise you, give it a shot.’ Really the first time I attempted the show was in an effort to sort of prove Birbiglia wrong and say like I don’t know if people are going to laugh at this. But I have learned never to doubt Mike. And those things really did dovetail nicely and springboard off of each other.

LD: How did Mike respond to it?

Pete Holmes had his own hilarious HBO comedy special (Faces and Sounds) as well as starring in their series, “Crashing”

LD: How do you know Chris?

Pete Holmes: It’s funny, I thought more people would ask, but here we are at the end of the line and you’re only the second person to ask, so it’s still fresh! It’s still a fresh answer. I was a fan of Chris, I would see him at UCB –actually not far from here, right around the corner. And then I took improv classes at UCB and Chris was actually my level 3 teacher because I had heard that he was so wonderful. And he was. I actually think Chris likes to downplay what a wonderful improv teacher he is because obviously he loves to perform more. But it’s almost a shame that we can’t clone him, because he’s such a great improv teacher.

LD: Your stand-up is a lot more silly and irreverent in contrast to the work Chris is doing in this special and I love that there’s space for both

Holmes: That’s nice, there is space for both! And I really love this show. It’s not the sort of stand-up I do but I also on my podcast [“You Made it Weird”] love to get very deep and weird and uncomfortable so I love seeing it in the live version with the laughs.

LD: On “You Made it Weird”, have you had any especially surprising guests?

Holmes: That happens all the time actually. For example The Lucas Brothers, the twin guys from 21 Jump Street movie…I [didn’t] know them that well either and they’re kind of low energy [in the film] and then they came on and were like the most high-energy, introspective, eloquent amazing guests. And you know, I didn’t really know them that well. So one of the things that I love about the podcast is that happens over and over. Your expectations just get completely blown out of the water.

The better answer would be Aaron Rogers, the quarterback for the Greenbay Packers…I didn’t know him either, but here comes a quarterback. And J.J. Redick who’s a basketball player just did it. And whenever these athletes come on and just kill it just as hard as the comedians, it makes me happy.

LD: With Chris being your teacher and then you had an HBO special and series first, is that kind of funny to you?

Pete Holmes: [laughs] I beat my teacher! It’s so funny, Chris and I had another thing where I did a talk show for Conan–he talked to me about this on his episode of my podcast. [Chris] was like when they gave you the talk show after Conan–which lasted about a year–he was like they were talking to me about [doing it] Like we’ve been competing in ways we didn’t even know! So I’m happy that now we’ve both landed at HBO, it’s not one or the other, but we can both be here. [laughs]