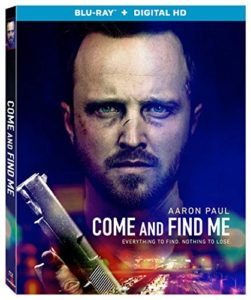 Aaron Paul shines out of the shadow of “Breaking Bad” and delivers a great performance on a film that no one will see. Zack Whedon, brother of Joss, is making his directorial debut on this film and delivers a solid drama with an cast that including Whedonverse regular, Enver Gjokaj (“Dollhouse”). I loved Annabelle Wallis in “Annabelle” and she was also great in this! Worth checking out if your a big fan of Paul’s work or curious to see brother Whedon take a shot (and score) with directing.

Official Premise: David and Claire’s idyllic relationship comes to an abrupt and mysterious end after Claire disappears without a trace. Devastated but incapable of letting go, David follows her trail down a frantic and increasingly dangerous path. Shocked at discovering that Claire was living a double life, he’s forced to risk everything if he ever wants to see her again.

“Come and Find Me” comes as a combo pack with Blu-ray and Digital HD copy. the 1080p transfer looks great with the way that Whedon shot the film. The special features are not a whole lot but what is included is great. There is a behind-the-scenes featurette called “Unravelling the Mysteries of Come and Find Me”. There is a great audio commentary with Writer/Director Zack Whedon and Producer Chris Ferguson. Definitely worth checking out for some cool insight.