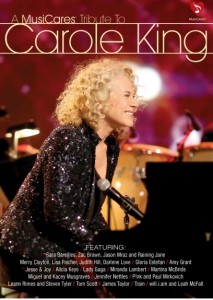 On January 24th, 2014 Carole King was honored as the 2014 MusiCares Person of the Year. During the event King along with a long list of super star guests performed some of Kings most celebrated songs from a career spanning decades. “A MusiCares Tribute to Carole King” is the film presentation of those performances which in include appearance by LeAnn Rimes, Gloria Estefan, James Taylor and Lady Gaga just to name a few. Proceeds from the sale of this disc will provide essential support for MusiCares, which ensures that music professionals have a place to turn in times of financial, medical and personal need.

“A MusiCares Tribute to Carole King” is the latest MusiCares release from Shout! Factory who has previously released tribute concerts dedicated to Paul McCartney, Barbara Streisand and Neil Young. Much like previous releases in the MusiCares series the concert is made up of a number of guest’s performances all paying tribute to the selected artist for that year. King is certainly more than deserving of the award and you can certainly tell the impact she has had on all music simply by looking at those who appear in her honor. Songs like “You’ve Got a Friend” performed by Lady Gaga and “Natural Woman” performed by Alicia Keys are definitely worth checking out as is my own personal favorite “Beautiful” performed by Sara Bareilles, Zac Brown, Jason Mraz and Raining Jane.

All in all a pretty entertaining release however if you’re looking for something a little bit more such as bonus content or interviews you won’t find it here. What you do get its 60 minutes worth of star studded entertainment which at times outweighs the lack of those missing special features.