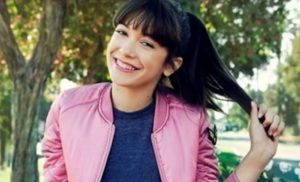 Teen actress Grace Kaufman has appeared in a variety of television shows including “The Closer” “2 Broke Girls” and the “The Last Ship”. Graces newest role has her playing opposite Matt LeBlanc in the CBS hit comedy “Man with a Plan”. Media Mikes has the chance to speak with Grace recently about her role on the show and also about her new film “Brave New Jersey”.

Adam Lawton: Tell us about your role on “Man with a Plan” and how the role came about?

Grace Kaufman: I play Kate Burns on the show. She is a very fun role to play because not only does she have a little bit of sass along with some rebellious qualities but she also really loves her family. That’s where I feel I connect with the role. Kate can be disobedient but loving at the same time. I had heard about the role by going through the normal auditioning process. I got the script and immediately fell in the love with my character Kate. I knew she was definitely a role I wanted to play. After my first audition I received a call back and that’s when I met Matt LeBlanc for the first time. That was very exciting for me as I have always loved his work. I found out shortly after reading with him that I had gotten the role and I was just over the moon about it.

AL: Was the role fairly laid out when it was presented to you or were you allowed to develop certain traits
of the character on your own?

GK: There were definitely some parts of the character that were already set ahead of time but, I also brought in my own set of traits and personality to the character. I think that’s what makes things more natural. I was very grateful for the opportunity to do that I was able to explore the character of Kate and really get to know her as well.

AL: What has it been like working alongside Matt LeBlanc?

GK: When I first met Matt at the initial call back it was like meeting one of your idols. I loved him on “Friends” and I have enjoyed his other work as well. Matt is very talented and a brilliant actor. To be in the same room and read with him was such a cool experience. Just being there was very exciting. We did our read through and there was some notes they gave me for the next read and everything just went from there.

AL: The show recently got picked up for a full run. What do you feel makes “Man with a Plan” stand out from other family based comedies?

GK: I feel like the show is not only one that’s fun for the whole family to watch but one that every member can relate to. I feel like a lot of the situations that happen on the show are things that happen to real families. That’s what I think makes the show so special and enjoyable for families to sit down and watch together.

AL: Was this your first experience filming in-front of a live studio audience?

GK: I have done some guest starring roles on shows which film in front of live audiences so I had some experience with that going in to this show. This was my first show that I was a series regular on where there would be a live audience. Even though I had done guests spots before in similar settings it was still very exciting and a bit nerve racking. The more we work in-front of the audience the more I have been able to see that they are not there to judge us. They are there to support us and laugh with us. Knowing that has made me start to feel very comfortable in-front of them now.

AL: You also recently had a film premier at the Austin Film Festival. Can you tell us about that?

GK: The film is called “Brave New Jersey”. I filmed that about a year ago in Tennessee. It was a lot of fun as I had never been to that state before nor had I ever done a period piece. The film takes place in the late 1930’s on the night of Orson Wells “War of the Worlds” broadcast. It’s set in a small town in Lullaby, NJ which overhears the broadcast and assumes real aliens are in-fact invading. The premise is based around if you know you only have one night to live what would you do? Having never done something like this before it was a lot of fun and I got to work with some really great people that I learned a lot from.

AL: What are your plans for the coming year?

GK: We start filming “Man with a Plan” again in January so I have that to look forward to. I also have a role on the show “The Last Ship” which is on TNT that just got picked up for a fifth season. I start working on that in April. I have been working on that show for about four years now so I am very excited that we are coming back for another season. The cast and crew have become like a family to me there. It’s quite different than “Man with a Plan” but they are both special to me in different ways. Shooting this fifth season is going to be really great.