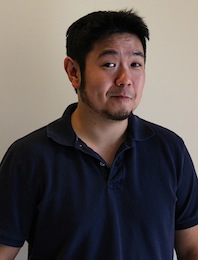 Eric Bauza is one of the most talented voice actors in the business. He is wel known for voice characters like Tiger Claw in “Teenage Mutant Ninja Turtles” to Chet in “Turbo FAST”. His latest role is also one of his biggest in which he is starring as Puss in Boots in the new Netflix animated series “The Adventures of Puss in Boots” from DreamWorks Animation. The show premieres today, January 16, 2015, on Netflix. Media Mikes had a chance to chat with Eric about this role and his voice work.

Mike Gencarelli: Tell us about what we can expect from the new Netflix animated series “The Adventures of Puss in Boots”?
Eric Bauza: Basically it is the same character that we have grown to love from the feature films and now he is getting his very own Netflix series, which is very exciting. The possibilities are endless here. They have him on the go again and he stumbles upon this town by accident and he was looking for – (in Puss’ voice) I was looking for treasure and as a humble gato, I was also looking for my next meal (end Puss’ voice). He finds this city and falls in love with the town and swears to protect it again outlanders. It is funny because even though he is a good guy, he always has that bit of mischief that follows behind him. He was basically after the town’s treasure but ends up becoming their protector since the town, of course, has orphans in it and he himself is an orphan.

MG: How does this show differ from the “Shrek” films and “Puss in Boots” spin-offs?
EB: I think we have a little more breathing room and knowing that the end of each episode is not the end of the show, since it is an ongoing series. So we have a lot time to explore. There is a lot of 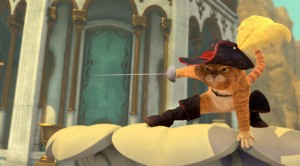 background explored as well as some great new characters. These are things that usually don’t have in a feature. As an actor, I think that is very comfortable to be in that situation.

MG: Is there any possibility of well-known characters from the series popping up in this show?
EB: I would love to have any of the flagship characters from the “Shrek” universe making an appearance. But we do have an abundance of new fairy tale creatures that we are bringing in. We also have a few great celebrity guest stars that we are bringing in like Danny Trejo, John Leguizamo and H. Jon Benjamin have done some characters for us. There are so many surprises that are coming up but I do not want to spoil them all, so tune in and find out for yourself.

MG: You have voiced numerous characters in your career; which have been your favorites?
EB: Puss in Boots is definitely up there for me and one of my favorites. Antonio Banderas is such a huge star and (in Puss’ voice) to do a part that was done by Antonio, as a voice over artist that is something else (end Puss’ voice). I have done Marvin the Martian for Warner Bros and to me Mel Blanc is the Godfather of voice over. So to know that I was able to do a Mel Blanc character is huge. 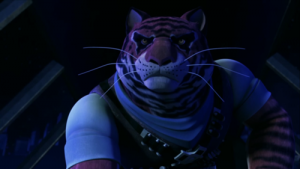 MG: Going from Puss in Boots to Tiger Claw in “Teenage Mutant Ninja Turtles” to Chet in “Turbo FAST”; what kind of characters are your favorite to play?
EB: That is the tricky about Puss in Boots because he always starts off as the rough around the edges – he is either an outlaw or a hero. I have done a vast amount of bad guys though. I voiced Destro from G.I. Joe. Marvin the Martian, like I said, he is a bad guy. I love being the bad guy every now and then. And I am a Canadian, so it is hard for me to be bad [laughs].

MG: Later this year you have “Transformers: Robots in Disguise”; what can you tell us about these projects?
EB: Yeah, “Transformers”, you are talking about an icon there. I got to work with Peter Cullen aka the voice of Optimus Prime. Khary Payton voices Grimlock and he also voiced Cyborg in “Teen Titans”. We all are like huge nerds already, so put us all in the same room and it’s a lot of fun.