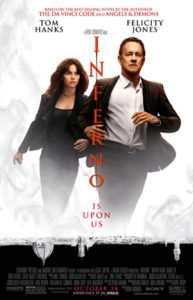 It’s funny that I saw this film the same night the World Series started. The film opens with Bertrand Zobrist (Foster) being chased through some classic Italian streets only to jump to his death from one of the grand towers. Is Bertrand’s story exciting or would I have been better off watching Chicago Cub player Ben Zobrist getting three hits in game one. I’ll let you know in a second.

Based on the latest best-selling novel by Dan Brown, and once again starring Tom Hanks as renown symbologist Robert Langdon, the tale finds Dr. Langdon waking up in a hospital believing that he is in Boston. Imagine his surprise when he discovers that he is in Florence, Italy and has been in the hospital due to having been grazed in the head by a bullet. His wallet and watch are gone but he does find something called a Faraday Pointer which, when activated, produces a map to Dante’s various levels of hell. Intrigued yet?

While I very much enjoyed both “The DaVinci Code” (I gave it 3 ½ stars out of 4 on a website I wrote for long ago) and “Angels and Demons” (3 out of 4 – same site), those films had a lot more action in them. I found “Inferno” quite boring at times, wishing I had paid my money to have someone read the book to me, which would have been more exciting than what was happening on screen. But I don’t blame the cast or the crew. This is the third time Hanks has played Langdon and it’s obvious that he is comfortable in the role. The supporting cast also does well, with Foster’s Bertrand Zobrist popping up through flashbacks to try to keep the story moving. And director Howard, one of my personal favorites, has no trouble keeping the action interesting. When there is action. Unfortunately there are also huge chunks where people just ramble on and on about Dante, hell and where they should be heading to next. Wherever it is, the cast waits and waits on Hanks to divulge the next destination, then gives him a resounding “Of Course!”

If you’re a fan of the series you might enjoy this more than I did. If not, spend your time with BEN Zobrist. Go Cubs!