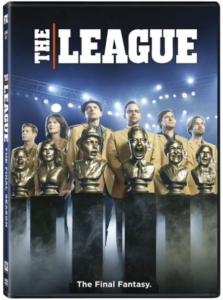 Let’s start with the fact that I am not a fan of football, fantasy football or sports in general, so right off the bat this show didn’t really call out to me. What I can appreciate though is a great cast including Mark Duplass, Nick Kroll, Paul Scheer, who are some of my favorite comedy actors, as well as Katie Aselton and Jason Mantzoukas. There is a whole lot of talent here that makes this show worth checking out for sure. Unfortunately this is the last season but the show has a great run on FX with seven seasons. Whether you are just finding out about this show or a hardcore fan, it’s worth checking out.

If you aren’t familiar with the show here is a series premise: A partially scripted comedy which follows the lives of six men who belong to a fantasy football league. The men take their contest extremely seriously and often will do anything to gain an advantage or win at any cost. Their obsession with fantasy football bleeds into other activities of their daily lives, affecting their jobs and families. A variety of colorful characters from the local community, from local business owners to a homeless man, get caught up in this zany world of fantasy sports.

Here is a season premise: Huddle up for the final outrageously funny season of the fantasy football comedy that’s always out of bounds. This year, the scheming smack-talkers find themselves embroiled in a string of scandals, kicking off when Pete discovers that his ex-wife Meegan is sleeping with a fellow league member. Next up, Taco flies into the drone zone, Kevin and Pete play chicken with their private parts, Jenny gets slot-shamed and Rafi hooks up with a watermelon. From blind-spot shenanigans to fake-book deflategate, Season Seven hits a highpoint by sinking to new lows.

The first disc includes the following episodes season 7: “Other Draft, The”; “Draft of Innocence, The”; “Blind Spot, The”; “Deflategate”; “Bully, The”; “Beer Mile, The”; and “Trophy Kevin”. There are also some Deleted Scenes included on here as well. Disc 2 includes the following episdoes “Last Temptation of Andre, The”; “Yank Banker, The”; “Block, The”; “Adios y Bienvenidos”; “13 Stages of Grief, The”; and “Great Night of Shiva, The”. Lastly there are also more Deleted Scenes on this disc as well as a Gag Reel, Alt Nation and Taco Tones for fans of the series.