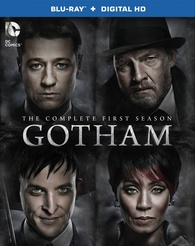 “Gotham” honestly was not my favorite show starting off. The first season takes a REALLY long time to get started, I would say close to ten episodes. The only really why I stuck along with it was because I felt that Robin Lord Taylor was enthralling as Penguin. I just loved his portrayal of that character in fact he ends up stealing the entire show. In fact, “Gotham” ended up having me favoring the villains over the good guys. Everyone from The Riddler to The Joker are getting their origin story here by the end of the season and that is when I fell in love with this show. So thanks to the wonderful villains, I stuck with this series and enjoyed it overall. I did notice that the season season focuses A LOT more on the bad guys and I think I was not the only one who wanted that more! Season two starts September 21st. Can’t wait!

Official Premise: The good. The evil. The beginning. When rookie Gotham City detective James Gordon, dedicated to restoring his crime-ridden metropolis back to its decent and illustrious past, catches the case of a murdered socialite couple, he promises their shattered, surviving son Bruce Wayne he’ll find their killer. It is an obligation and an obsession that will cost him dearly – and set the stage for the gritty and exciting world of Gotham. Inspired by DC Comics characters beloved by generations, this gripping hit series from the talents behind The Mentalist, CSI, Nikita and Gossip Girl reaches deep into Batman lore to uncover the sinister layers of corruption that secretly rule Gotham City, spawning ground of the world’s most iconic villains. Delve into the circumstances created the bizarre personas who would become Catwoman, The Penguin, The Riddler, Two-Face and The Joker in an entirely new chapter that’s never been told.

The Blu-ray comes with a combo pack including a digital HD copy of the season. Honestly, I wasn’t really too impressed with the “Gotham” that was created for this show. It felt very small and when spanned out quite CGI but it still looks solid with the the show’s 1080p Full HD Video. The DTS-HD Master Audio for English 5.1 track also works well with the occasion action. The special features are decent but include no commentaries, which is a bit of a bummer. First off we have “Gotham Invented”, which is a three-part behind-the-scenes look into the series. “Designing the Fiction” looks more into the visuals and locations and more from the series. “The Game of Cobblepot” looks depper into Robin Lord Taylor role. “The Legend Reborn” focuses on the show’s pilot. “DC Comics Night: Comic-Con 2014” showcases shows like Gotham, Arrow and The Flash. Lastly there are Character Profiles, a few unaired scenes and a funny gag reel included.