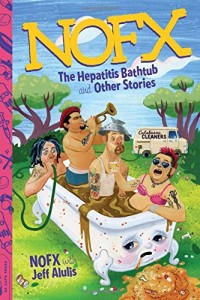 NOFX has been called one of the worlds most influential and controversial punk bands, but its full story has never truly been told until now. The band has sold over 8 million records, toured six continents and founded one of the most successful indie labels in the world. Together with writer/filmmaker Jeff Alulis “NOFX: The Hepatitis Bathtub and Other Stories” takes a look back on more than three decades of completely inexplicable success told directly from those who lived it providing a close-up look at the punk-rock music genre and the punk-rock life.

Growing up as a skateboarding, punk rock music fan of late the late eighties and nineties I was extremely anxious to get a hold of this book. Written much like Motley Crue’s famous/infamous tell all “The Dirt” “NOFX: The Hepatitis Bathtub and Other Stories” is a similar tale of debauchery minus the excess and stereotypical “Rock n Roll” life. Instead you get an in-depth look at the seedier underbelly of rock n’ roll bastard step son know as Punk Rock. Over the course of the books 368 pages band members from past and present tell their tales of trial and tribulations while wading through a cesspool of filth consisting of drugs, murder, suicide and the occasional S&M occurrence. After reading some of these stories it’s a complete miracle that the band is around to tell these let alone have enough memory to recount the tales so vividly and in such detail. Bassist “Fat Mike” Burkett, Guitarist Erik Melvin, Drummer Erik “Smelly” Sandin and Guitarist Aaron “El Hefe” Abeyta along with a list of other notables keep your attention page after page making this book damn near impossible to put down. Spread out amongst the tales of punk rock madness are tons of rare photos and show fliers from all stages of the bands career which only seem to add to the books over all appeal.

“NOFX: The Hepatitis Bathtub and Other Stories” is definitely not for the faint of heart. The book and its writers pull no punches as they are both candid and real as they can be in this mesmerizing tale of the true punk rock life. Even if you have never heard of the band NOFX or its members do yourself a favor and grab a copy of this book!

Also be sure to check out our exclusive interview with Fat Mike in the interview portion of the site.