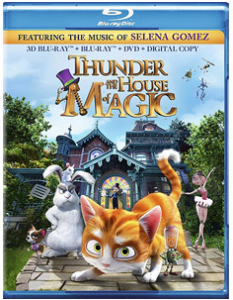 “Thunder and The House of Magic” is the latest family movie from the directors Ben Stassen and Jeremie Degruson, who are behind other international films like “A Turtle’s Tale: Sammy’s Adventure” and “Fly Me to the Moon”. This film has a fantastic original music by composer Ramin Djawadi (“Game of Thrones”) and also from pop-star Selena Gomez. The film is clever and the visuals are definitely easy on the eyes, though the story does deliver much magic. Kids would definitely dig it and parents should be able to stomach it.

Official Premise: Thunder, an abandoned young cat seeking shelter from a storm, stumbles into the strangest house imaginable, owned by an old magician and inhabited by a dazzling array of automatons and gizmos. Thunder must learn how to get along with the other animals living there. When the magician gets into a car accident, however, the pets must join forces against an evil nephew who tries to sell his house.

Shout! Factory delivered this film with a two-disc Blu-ray™ 3D Combo Pack (including a Blu-ray 3D and 2D, DVD and digital copy). The digital copy though is outdated since it is not through Ultraviolet. The 3D in the film is great and executed very well with otherwise impressive depth. The DTS-HD Master Audio track also works well with the film’s music.

This release is currently only available exclusively at Walmart stores everywhere. There are some special features included but nothing special. “Origins” is a look into the how the film was born. “Character Animation” looks into the style used to create these fluffy stars. “The Making of the Soundtrack” dives into the tunes for the film. Lastly there is a teaser and trailer included.