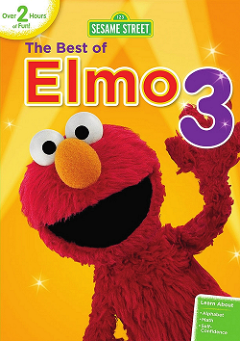 BURBANK, CA (February 18, 2015) – Elmo is back and more lovable than ever as Warner Bros. Home Entertainment and Sesame Workshop, the nonprofit educational organization behind Sesame Street, release Sesame Street: The Best of Elmo 3 on DVD and digital on March 3, 2015 for $14.98 SRP. This trip down memory lane will teach Elmo fans both young and old about the importance of friendship and helping others. Elmo sings and dances his way through numbers, letters, vocabulary, and emotions with his Sesame Street pals and a few famous friends like Melissa McCarthy, Taye Diggs, Drew Brees, Romeo Santos, and many more! Order due date is January 27, 2015.

Elmo fans will love this new DVD where everyone’s favorite furry and red friend is reminded of all the fun, friends and music he’s made on Sesame Street. Join Elmo as he does “The Elmo Slide,” finds out about “The Power of Yet” with Janelle Monae, and sings about the number 5 with the band Train. Elmo learns about counting, vocabulary and even how manage his emotions in the hit song, “Belly Breathe” with Colbie Caillat and Common. This special collection is filled with Elmo moments fans will treasure. As an added extra, this release features a special bonus title which will provide over two hours of Elmo!

“With such great response from the release of Sesame Street: The Best of Elmo 2, Warner Home Bros. Home Entertainment is thrilled to release the next edition, Sesame Street: The Best of Elmo 3,” said Jeff Brown, WBHE Executive Vice President and GM of Non-Theatrical Franchise Marketing. “Kids now have the opportunity to see their favorite TV character’s most memorable segments all on one fantastic DVD.”

Celebrating its impressive 45th anniversary this season, Sesame Street is the #1 top-of-mind preschool show with moms. The series has received more Emmy awards than any other show in television history, as well as a Lifetime Achievement Emmy Award.

About Sesame Workshop
Sesame Workshop is the nonprofit educational organization behind Sesame Street which reaches 156 million children across more than 150 countries. The Workshop’s mission is to use the educational power of media to help all children reach their highest potential. Delivered through a variety of platforms, including television programs, digital experiences, books and community engagement, its research-based programs are tailored to the needs of the communities and countries they serve, helping children everywhere grow smarter, stronger and kinder. For more information, visit us at www.sesameworkshop.org.

About Warner Bros. Home Entertainment Inc.
Warner Bros. Home Entertainment (WBHE) brings together Warner Bros. Entertainment’s home video, digital distribution and interactive entertainment businesses in order to maximize current and next-generation distribution scenarios. An industry leader since its inception, WBHE oversees the global distribution of content through packaged goods (Blu-ray Disc™ and DVD) and digital media in the form of electronic sell-through and video-on-demand via cable, satellite, online and mobile channels, and is a significant developer and publisher for console and online video game titles worldwide. WBHE distributes its product through third party retail partners and licensees, as well as directly to consumers through WBShop.com and WB Ultra.