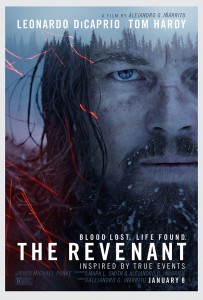 As a young man, I often accompanied my parents to the drive-in to see movies I probably wasn’t old enough to see. My dad was a big action and western fan, and my early film memories are filled with flickering images of John Wayne, Clint Eastwood, Steve McQueen, Richard Harris, Sean Connery and others. I can remember attending a double feature of two Richard Harris films, “A Man Called Horse” and “Man in the Wilderness.” I remember very little about them but, since I learned that “The Revenant” tells the same story as “Man in the Wilderness” I thought I’d share.

The time is 1823. America is not even a half-century old. A fur trapping expedition, led by noted trapper Hugh Glass (DiCaprio) comes under attack by Native Americans. Many are injured and the group decides that it’s best to stow its furs, to retrieve later, and head back to their settlement. On the long journey back, Glass stumbles upon two bear cubs. Before he can react he is attacked by the mother and horribly mauled. Too badly injured to move, the leader of the expedition (Domhnall Gleeson – pretty much appearing in every film this holiday season, including “Brooklyn” and “Star Wars – Episode Seven: The Force Awakens”) entices two men, the grizzled John Fitzgerald (Hardy) and the young man, Jim Bridger (Poulter), to stay with Glass until he dies. The men are to give him a proper burial and then rejoin their group. For doing this they will each get a monetary bonus. Also staying behind is Glass’ son with his Native American wife, Hawk (Forrest Goodluck). Of course, one the group leaves those left in charge begin to panic about being in the woods alone in the dead of winter. Fitzgerald, whose head bears the scars of a scalping gone wrong, decides to hurry the process along. He convinces Bridger to abandon Glass in the woods, reasoning that he will soon die anyway. But Fitzgerald is unaware of what Glass told Hawk when the boy was younger: “As long as you can still grab a breath, you fight.”

Beautifully filmed and superbly acted, “The Revenant” is a true epic adventure about one mans will and desire that is literally being carried on the bear-chewed back of Leonardo DiCaprio. With so many outstanding performances behind him, including “What’s Eating Gilbert Grape,” “Gangs of New York” and “The Departed,” and a long future in front of him, I hesitate to call his work here the performance of his career. So I’ll call it the performance of his career SO FAR! Using very little words, DiCaprio manages to convey the pain and agony, both physical and spiritual, that Glass endures with just his eyes. It truly is, in my opinion, the best acting work turned in this past year by an actor. He is matched by Hardy, who also gives a career defining performance here.

With the snow-covered forests as his tapestry, director Inarritu, who won three Oscars last year as the co-writer, director and producer of “Birdman,” paints another masterpiece. The story flows as easily as the water moves down the Missouri river and the violent action on-screen is amplified by the white and pristine backgrounds. This is, in my opinion, the best film of 2015.