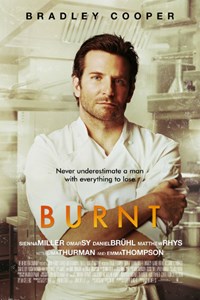 A man stands behind a non-descript counter in a New Orleans restaurant. His hands are a blur as he shucks oysters. One by one by one. In a voice-over we learn that he was once a famous chef, whose substance abuse and diva attitude lost him his restaurant, his reputation and his dignity. His self-assigned penance. Shucking oysters. He stops, pulls out a notebook, and writes a number. He then takes off his apron and walks out the door. One million is enough.

Built around a strong performance by Cooper, “Burnt” is a story of redemption. Adam Jones (Cooper) finds his way from New Orleans to London, where he drops in on his former maître’ D (Bruhl), who is now running his father’s hotel. When they were a team in Paris, their restaurant earned two prestigious Michelin stars. Adam maintains that he can get three. After getting Adam to consent to see a therapist weekly, as well as submitting to random drug and alcohol tests, the two form a partnership. Adam spends his days visiting other restaurants, sampling the foods and recruiting from the respective kitchens. He also visits a restaurant owned by a former cooking colleague (Matthew Rhys), who is now the top dog on the restaurant scene. As Adam begins to achieve his goals, his adversary begins to flounder and soon it is a battle-royal in the kitchens. Both men learn lessons, many of them non-food related.

Six years ago, Bradley Cooper was best known as the handsome Phil from “The Hangover.” Since then he’s earned a Tony Award nomination for his role in “The Elephant Man” on Broadway and is currently on a streak of three consecutive Academy Award nominations, an achievement only done nine times previously by such talented actors as Spencer Tracy, Gregory Peck, Richard Burton, Al Pacino and Russell Crowe. While I don’t think “Burnt” will bring another nomination, Cooper is superb in the role. His passion for food burns in his eyes. Joining him is Miller, who he recruits and soon makes his chief assistant, and Bruhl, whose character we soon learn has had a long time crush on Adam.

Director Wells keeps the film flowing smoothly and the scenes of food being prepared and served are like little visits to a museum. I’m not one for fancy dishes but even I started getting hungry. Every detail is brought out to be marveled at. If there is a film to compare it to it would be Jon Favreau’s “Chef” from last year. Well known fiery chef Gordon Ramsay served as an executive producer on the film so I have no doubt Cooper based his performance on him, one that is strong but not over the top. Like the food it highlights, “Burnt” is a film to savor. Save room for dessert!