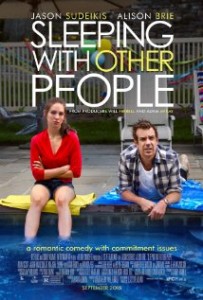 Writer/director Leslye Headland is best known for her work on the television series “Terriers” and her directorial debut, the film “Bachelorette.” She also adapted this past spring’s film, “About Last Night” from the original Tim Kazurinsky and Denise DeClue script. Her latest film, “Sleeping with Other People,” has earned nothing but great reviews since it played at the Sundance and Tribeca Film Festival. With the film getting ready to open nationally, Ms. Headland took the time to speak with me about it and what she has planned for the future.

Mike Smith: Where did you come up with the story for “Sleeping with Other People?” Is it based on somebody you knew?
Leslye Headland: Usually when I write I’m writing about a combination of things that are going on in my life. Usually it starts with a question I ask myself. My first film, “Bachelorette,” asked if women are still trying to get married. Is that still a goal we worry about? And is it a worthy goal? Is that something that we actually want or is it just something we’ve been pursuing for so long and so often that we’ve been told it’s something we deserve. But to take it to the ridiculous. On this film the question I was asking myself was, “Is it really possible to fall in love? To REALLY fall in love?” The way we long for. John Cassavetes said that we need love like we need food, water and air. We just don’t know how to get it. That’s really where it sprang from. Can we make a romance that’s very real and funny and touching and scary and stupid? All of the things that romantic relationships are.

MS: For lack of a better word, I found the film to be very “adult,” in the vein of “Bridesmaids” and “Trainwreck.” Yet, like those two films, though it’s “adult” it’s also very realistic. Is that something you strove to show? The “honesty” in how some relationships are?
LH: I guess so. What I really wanted to do was make sex less of a reward or a bodily function. It’s usually shown as one or the other. I wanted to portray sex accurately. It’s very weird. There’s always something going on between you and the person you’re having sex with. I wanted sex to actually be another character in the movie, not just a thing they were doing. I wanted to showcase the sex almost as set pieces. We choreographed and story-boarded those scenes almost as if they were dance numbers. There was a lot of thought put into how to represent sex within the movie. I think that was really the goal.

MS: You’ve put together a great cast. I’m just outside Kansas City and we see Jason Sudeikis’ mom at screenings often. I was really impressed with Adam Scott. This is really a change-of-pace role for him. Did you have him in mind when you were writing? Do you write your characters with certain actors in mind? 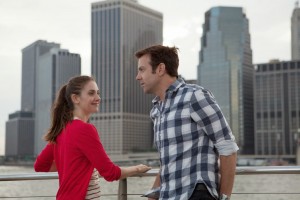 LH: I don’t write the part FOR the actors, but I do have ideas on who and how I’d like the role played. I wrote the part of Jake for Jason. I do write them with the hope that a specific actor will do them. I ask them if they would be interested. I mentioned the film to Jason before I started writing and he said that it sounded interesting. We hung out some and talked about romance. We talked about our own personal feelings. He’s obviously found love. He fell in love with Olivia and they have a child now. (NOTE: Jason Sudeikis and Olivia Wilde are the proud parents of a little boy named Otis). I’ve settled down now with my partner. So we pretty much just sat down and talked about our dating years. Getting back to your first question, it never even occurred to me to cast Adam Scott. I mean I love him and he’s one of my favorite actors but it just never occurred to me. I mean, the character is just so evil, and Adam is just so nice. But I also think it takes an actor that good to BE that bad. He and Allie (Alison Brie) had worked together on something and he saw the script. He asked me if I had cast the role and I told him I hadn’t. “Would you like to play it? I’d love you to play it.” He said he really wanted to play a bad guy. And that’s why we had him grow the mustache. We really wanted him to be unrecognizable.

MS: The film has already won raves and awards, including from both the Sundance and Tribeca Film Festivals. Does that help you in preparing for your next film?
LH: Oh yeah! It’s funny, I’m just finishing up my next script now and we’re going to be going out with it soon. I hope it does. My next script is in a totally different genre’. It’s a thriller. I appreciate the accolades but I wonder if it will make the next film hard to sell just because it’s NOT a comedy (laughs). It will be interesting to see what happens. I hope it goes smoothly. I’ll keep you updated!