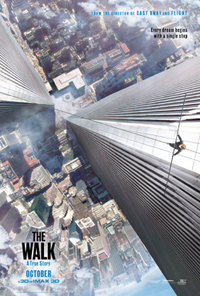 When I saw James Marsh’s 2008 documentary Man On Wire, I recall my heart racing. Just listening to Philippe Petit rapid fire recounting his tight rope walk between the Twin Towers, and the amount of sheer luck that his plans hinged on, was exhilarating. When Joseph Gordon-Levitt as Petit popped up on the top of the torch of the Statue of Liberty in the opening of Robert Zemeckis’s The Walk to narrate the exact same tale, well exhilarated is not the word I’d use. In a perfect world, audiences could see the breathtaking wire walking sequence that Zemeckis has crafted appended to something as thrilling as that Oscar-winning documentary but of course this is not a perfect world. As Gordon-Levitt’s Petit would say through outrageous French accent, c’est la vie. In moving from Man on Wire to The Walk, we must revisit Petit’s spectacular tight rope act with a hefty side of fromage.

The year is 1974 and French street performer Petit, is enamored with wire walking. During his search for more places to hang his wire, he finds a newspaper heralding the nearly-completed Twin Towers in New York City. They’re perfect and he becomes obsessed with the idea of walking between them. In racing towards this vision, Zemeckis takes us through a candy colored vision of the France from the countryside to the circus and Paris. It all culminates in a newsworthy walk between the two towers of the Notre Dame cathedral–a death defying feat unto itself, presented here as a quick bit of exposition. Along the way he picks up French ‘accomplices’ in girlfriend Annie (Charlotte Le Bon in a thankless role), a photographer (Clément Sibony) and eccentric circus mentor Papa Rudy (Ben Kingsley) who pleads with Petit to use a safety harness (he won’t). For all the fast paced camera work and bustling Parisian unicycle rides, this first act drags under Petit’s over aggressive narration. In light of the Marsh documentary where the vibrant real Petit told his own story, my mind truly boggled at having this level of wall to wall voice over. For audience members who have not seen the doc, your tolerance may be higher than mine. If anything I miss the different voices from Man on Wire, because here doubt by other characters is treated as repressing an excitable artist. His success is taken as a foregone conclusion.

In 1970s New York, the film takes on more of the heist-like mood that was established in Marsh’s documentary and the film finally takes off. Petit enlists his American accomplices and the element of suspense is restored while Petit and co employ ‘spywork’ to figure out the inner workings of the massive construction site. The level of lax security and staff eluded with charm and confidence of the crew is really something to see from a post-9/11 perspective and is one of the essential elements to Petit’s being a once-in-a-lifetime accomplishment. The biggest hurdle is getting from the sky lobbies to the roof and ensuring the roof is free of guards. Here Zemeckis is great at giving us what can only be described as warm up acrophobia as the team contends with incomplete elevator shafts in the build up to the final walk across the void. That walk is undeniably breath taking and seeing it with a crowd in a theater, the level of tensed muscles was strongly felt. And the walk is not short either. As Petit the artist felt more and more connected to the wire and the towers, the more liberties he takes up there. And the sequence is stunning in spite of Petit remaining on hand to tell us how stunning it is.

With the 3D walk itself being worth price of admission, more so in vertigo-inducing IMAX, and poignant final moments that especially resonated with the New York Film Fest crowd, Zemeckis has crafted a spectacle to be sure even if the rest of the film will likely not stand the same test of time that the 2008 documentary has. 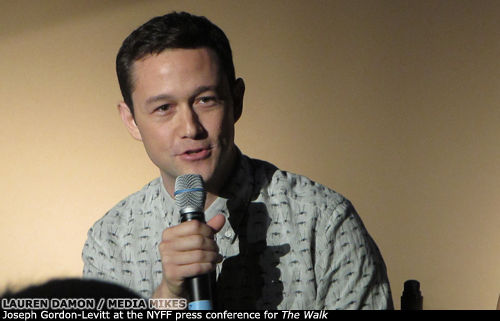 The Walk opens in limited IMAX on September 30th with a wide release on October 9th.