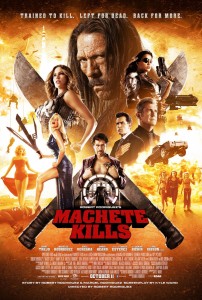 It’s well known that Machete Cortez don’t text. He also doesn’t tweet. Or smoke. But what he does do, better than anyone, is kick ass. And kill. Again.

While attempting to prevent an illegal sale of government weapons Machete (Trejo) is abducted and brought to the White House for a meeting with President Rathcock (Estevez – better known as the artist formerly known as Charlie Sheen). The president asks Machete to return to Mexico and find out where the weapons and drugs are entering our country. In return for his services Machete will find his criminal record erased and be made a U.S. Citizen. What could go wrong?

As someone that worked in the theatre business in the late 70s and early 80s many of my favorite memories involve working the all night weekend shows. Kung Fu. Horror. Sexploitation. We played them all. Some nights we would have 500 screaming patrons, hiding their eyes at the scary scenes, punching the backs of the seats in front of them during the fights and generally having a great time in the dark. “Machete Kills,” like the original “Machete” (and, for that matter, director Rodriguez’ and Quentin Tarantino’s “Grindhouse” double feature) pay homage to that great period of scratched prints, over the top bloodshed and women with machine-gun brassieres!

The story goes like this: once in Mexico Machete is instructed to visit Marcos Mendez (a hilarious turn by the Oscar-nominated Demian Bichir). Mendez has unfortunately developed a split personality. One moment he’s a strong willed crusader fighting for his people and the next a terrorist who has stolen a nuclear missile and pointed it towards Washington D.C. To ensure his plan won’t fail, he has had the trigger mechanism installed in his heart. If his heart stops, the missile fires. Machete also has to deal with a master-of-disguise hitman named the Chameleon and an industrial tycoon (Gibson, in fine form) with plans to fly his own space shuttle. Along the way there is enough action and blood to please even the most hardcore grindhouse fan.

As always, Rodriguez has peppered his cast with familiar faces, including “Modern Family” star Sofia Vergara as an over protective mother (and the owner of the aforementioned deadly bra), Amber Heard as Machete’s contact, whose cover is to constantly participate in Texas based beauty pageants and the quartet of Cuba Gooding, Jr, Walter Goggins, Lady Gaga and Antonio Banderas (a Rodriguez veteran) as the Chameleon. Also returning are “Machete” veterans Michelle Rodriguez and Tom Savini, whose first onscreen appearance drew cheers from the screening audience. Whether it’s because his Osiris was a memorable character in the first film or because he is one of the greatest make-up artists of all time, I don’t know. But either way it was applause well deserved. As Machete, Trejo is a straight faced, slow-burning time bomb. You can read his life story in the lines on his face.

Speaking of makeup, Greg Nicotero and his staff at KNB again outdo themselves in the gore department. Behind the camera Rodriguez moves the story along smoothly and Kyle Ward’s screenplay, based on a story by director Rodriguez and his brother, Marcel, keep the one liners coming.