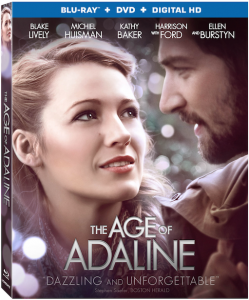 Blake Lively is definitely one of Hollywood most underrated actors. She is goregous firstly and secondly she can really act. “The Age of Adaline” was lost in the midst of a wave of summer blockbusters. It is a romantic film but it has this magical quality about it that really interested me throughout. I really though that the two leads also had good chemistry and really clicked. Other than  Blake Lively (“Gossip Girl”), she is joined by Michiel Huisman (“Game of Thrones”), Kathy Baker (“Edward Scissorhands”), Harrison Ford (“Star Wars”) and Ellen Burstyn (“Requiem for a Dream”)! Sick cast right? Definitely worth checking out.

Official Premise: After miraculously remaining 29 years old for almost eight decades, Adaline Bowman (Blake Lively) has lived a solitary existence, never allowing herself to get close to anyone who might reveal her secret. But a chance encounter with charismatic philanthropist Ellis Jones (Michiel Huisman) reignites her passion for life and romance. When a weekend with his parents (Harrison Ford and Kathy Baker) threatens to uncover the truth, Adaline makes a decision that will change her life forever.

“The Age of Adaline” is released as a Blu-ray Combo Pack with a DVD and digital copy included.  The 1080p transfer looks amazing through all the different generations that Adaline experiences. The winner is definitely the Dolby TrueHD audio which features a Dolby Atmos® soundtrack, which really works with the period explored in the film. The special features are decent as well including deleted scenes, three features entitled “A Love Story for the Ages”, “Style Throughout the Ages” and “Discovering Young Harrison Ford: Anthony Ingruber, An Online Sensation”. Lastly there is  an audio commentary with the director giving some good behind-the-scenes insight.