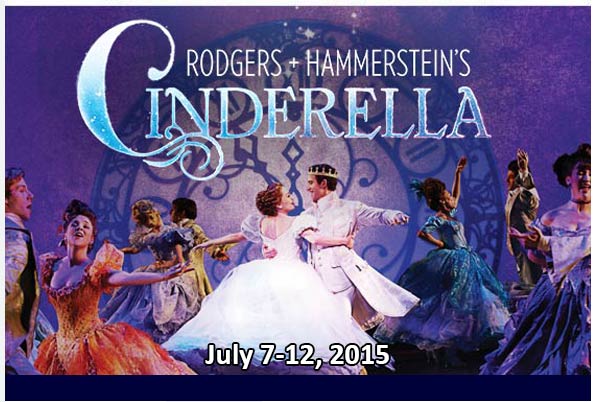 Imagine I’m telling you this in my “old man” voice: Back in my day, theater on television was a rarity. Two things that kids looked forward to were the annual presentations of Mary Martin in “Peter Pan” and “Cinderella,” starring Lesley Ann Warren and Stuart Damon. This touring production captures the magic of my early television memories.

The story is well known. Cinderella (Paige Faure) lives with her mean step-mother (Beth Glover) and two step-sisters (Kaitlyn Davidson and Aymee Garcia). While step-mom dreams up ways of marrying her daughters off and moving up in life, Cinderella toils in the house, cooking, cleaning and making the beds. A chance meeting with Prince Topher (Andy Huntington Jones) allows her to dream of a better life When the Prince invites every eligible lady in the kingdom to the ball, in the hopes of meeting his future bride, Cinderella longs to go. But she could use a little help…

Well produced and performed, this version of “Cinderella” mixes up great songs (by the legendary Oscar Hammerstein and Richard Rodgers), a strong cast and a familiar story to make it sure to entertain everyone in the audience, both young and old. The cast is in fine voice and the choreography is sharply performed. Both leads have great range and the supporting characters, especially Cinderella’s mean relatives, prove themselves fine comediennes. And the magic isn’t reserved just for the performances. Some amazing sleight of hand occurs when Cinderella obtains her ball gown. I urge you to pay attention and if you can tell me how they do it, please drop me a line. The accompanying orchestra also helped keep the show moving, helping give a familiar story a few much needed high notes.