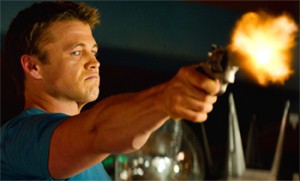 Now available on Video On Demand and opening Friday April 10th in New York City, “Kill Me Three Times” is an Australian dark comedy thriller from director Kriv Stenders. The film centers around sniper Charlie Wolfe (an amusingly malicious Simon Pegg) who’s being paid to execute a hit on Alice (Alice Braga), the cheating wife of Jack (Callan Mulvey). Little does Wolfe know that Jack is not the only person out for his target and bloody mayhem and blackmail ensues.

Luke Hemsworth takes on the role of Dylan the tough mechanic with whom Alice is carrying on her affair. I got a chance to speak with Luke on a phone call from LA about the film, working in Australia and his recent stint on Saturday Night Live with younger brothers, Chris and Liam.

Lauren Damon: The film is kind of crazy, who first introduced you to the project?
Luke Hemsworth: That’s a good question, I think someone sent the script and said ‘have a read of this, if you like it, let’s talk more about it’. And of course I read it you know in one go—which  is always a good sign—and then I jumped on Skype with Kriv and you know, we were all on the same page and then from that point we went on and did a chemistry reading with Alice Braga and that obviously went pretty well and here we are!

LD: Was Alice already signed on at that point when you did the chemistry read?
LH: She was signed on. She had been signed on for like five years or ten years or something, she was signed on since she was a little kid I think! [Laughs] 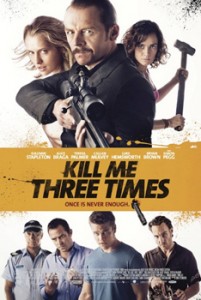 LD: How would you describe your character Dylan?
LH: I would describe him as a loyal, humane puppy dog who is forced to deal with revenge and deals with it pretty well!

LD: Was it more appealing for you that Dylan is one of the characters that is decent and can have a happy ending versus everyone else?
LH: Yeah, it’s an added bonus I think. I haven’t even looked at it from that point of view—the journey is you know, that’s the fun part.

LD: Your journey mostly includes scenes with gunfights and you get a car chase. Did you have  fun making that? Had you experienced that before?
LH: Soooo much fun! I’ve experienced a little bit of that, but yeah…it was a complete blast. I got to do some really good, heisty you know, funny stuff. There wasn’t a day on set I didn’t enjoy and think ‘gee I really wanna be here.”

LD: Particularly was it fun having a big standoff with Simon Pegg’s character?
LH: Yeah, I mean it was great. It was really at the start of what we were doing. I think it was one of my first days was the stand off with Simon Pegg. And we kinda hung out and got to know each other, so yeah, it’s just such an interesting dynamic when that happens. And fortunately Simon is like the coolest guy in the world so we got on really well and we had an awesome time.

LD: Contrary to the bloody fights, you’re really in the most beautiful settings, how was it to shoot on these locations and was that an intentional juxtaposition?
LH: Oh for sure, yeah. The locations became a character in a way, so it was very intentional. For me, it was a huge added bonus to work not only as an actor, but also a human being I got to spend time surfing and you know, playing in an area of my native country, which is exceptionally rugged and beautiful with amazingly grounded people.

LD: Are you still based in Australia generally or have you also moved to Hollywood?
LH: I’ve been here for two years now, yeah, I’d moved before this all happened. And of course you when you make the move, then something’s happening back in Australia or somewhere else. So I spent a little bit of time back in Australia.

LD: So you were in LA when you got this part in Australia?
LH: I was yeah I got taken back two or three times, I did another project called Infini with Shane Abbess, who directed Gabriel, which also drops very soon—comes out in May I think—which is amazing, another amazing Australian kind of phenomenon which I’m sure we’ll be talking about soon.

LD: I noticed up until recently, you have a lot of television credits, does that affect at all how you approach a project? Do you prefer one or the other?
LH: No, I definitely don’t have—I don’t care one or the other, you kind of approach them both the same. Yeah, definitely approach them both the same. There’s a level of you know, pre-production work and research which goes into each character which goes into each and every day. I think that kind of falls away and hopefully you’re left with something which looks presentable [laughs].

LD: Do you foresee pursing more films going forward?
LH: Umm, yes and no, you know I don’t rule out one or the other. I’m about to start shooting West World for HBO so you know that’s TV but it’s…kind of— 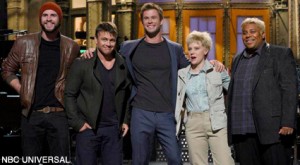 are producing so you know it’s a huge project.

LD: If you’re allowed to talk about about that at all, what’s your Westworld role like?
LH: I’m like the head of tech security for the army and it’s the robot part. The human technological side. I can’t give much too away other than that I think.

LD: Thanks! Of course the last time I saw you on US TV, you were on SNL a last month with your brothers, what was that like?
LH: [Laughs] It was great! I mean hilarious. You know a huge kind of notch on the belt for me, definitely. For all of us. Chris did such a wonderful job, incredibly honored to be a part of that process. It was fun.

LD: Is SNL as iconic to Australian viewers as it is here?
LH:  To certain Australians, definitely. Maybe not as much as Americans, but you know I know of it, I definitely hear of  a lot about SNL. Maybe not the same kind of love and mystery that it does here, but definitely a huge honor, absolutely.

Once again, Kill Me Three Times premieres this week at NYC’s Landmark Sunshine Cinema and is still available on VOD. Meanwhile, as Luke said, you can next look for him in Infini, opening on May 8th.