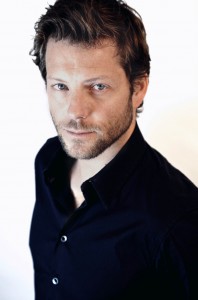 Most audiences are familiar with actor Jamie Bamber from his role as Apollo on the acclaimed television series “Battlestar Galactica” and its accompanying films. I was a huge admirer of his work on the UK version of “Law and Order.” This week Mr. Bamber appears as a man on trial for 33 serial killings in the new film, “John Doe: Vigilante.” While taking a break at home (with his dog) we spoke about the film and the change of pace casting.

MS: “John Doe: Vigilante” is such a change of pace role for you. What drew you to the project?
JB: Definitely it was the script. I just thought it was such an unusual script. It definitely addresses the view of the audience…without hitting them over the head and railroading them into having an outraged, bloodthirsty, justice-seeking mob opinion. I found the subject to be very threatening to society and civilization and goodness and everything like that. But then it shifts on you. Just as you’re being pulled into this mob response and losing your faith in justice, it changes your view on what that view is. It makes you feel reprehensible for going there. And I think it really does do that. When you watch the film… (Mr. Bamber’s dog starts barking) Sorry (more barking and whispering). Sorry. It was that very unusual script that drew me to the story.

MS: You’ve played quite a few likable characters in the past. Was the kind of character John Doe is part of your decision in taking the role?
JB: Definitely. You’re quite right. I’m often offered roles that are the decent guy in an extraordinary position. Actually, when I looked at this, I thought “this is an opportunity to do something very different.” And I thought that the guy was fundamentally a decent guy who ended up going on a very unusual journey. Some awful things have happened to him in circumstance and he has lost his moral anchor. But the places he goes to – the dark places – the extreme isolation he experiences behind the mask and when he’s in prison – those are the opportunities to play things I hadn’t played before. And I greatly enjoyed the challenge.

MS: You’ve done quite a bit of both film and television work, do you have a preference? Do you prepare differently as an 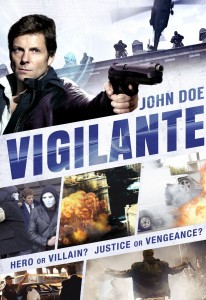 actor for a film role as opposed to a television role?
JB: They’re both so wonderfully different and yet so wonderfully the same. They both use cameras and the cameras help tell the stories but there’s something about television where you get to watch the stories unravel and go on and become more and more complex. And that also applies to the people you’re working with, too. You become a family. I mean I consider “Battlestar Galactica” one of the greatest experiences of my life. So that side of television is certainly a wonderful thing. The longevity and the continuation. And yet there’s also something amazing about telling a story from beginning to end, from A to Z, in two hours of screen time. I mean you go into the project knowing how it ends. So it may be a bit more demanding in the acting choices you make. You have to be able to tell a story in ninety minutes.

MS: You’ve also voiced a few video games. Is that another “type” of acting as well?
JB: I love doing voice work. I love doing that, it’s great. I love trying to communicate the scene only through the spoken voice. I’d like to do more. I’d like to do a motion capture game, I think that would be interesting.

MS: What do you have coming up?
JB: I just finished a film in Canada called “Numb.” It’s a film I’m very proud of and I can’t wait to see. I also just finished “The Better Half,” which is a romantic comedy which should be out later this year or early next year. I’m keeping busy with different things. No long-running TV show at the moment but I’m keeping busy.