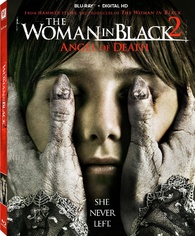 I am nothing but excited Hammer Films is back in business making new horror. I was a big fan of the first “The Woman in Black”. Honestly though, “The Woman in Black” wasn’t a film that I was screaming for a sequel but the trailer for “Angel of Death”, looked creepy as well. Too bad, the film didn’t pan out at all. The scares were so tame, you barely even noticed them. The pace was way off and the story was didn’t draw me in at all.

Official Premise: The supernatural terror returns and unspeakable evil sets its sight on new prey when a group of orphaned children are forced to move into the abandoned Eel Marsh House with their caretakers, Eve and Jean. As the children begin to mysteriously disappear, Eve makes a shocking discovery…it may not be a coincidence that she has come to reside in a place inhabited by the murderous Woman in Black.

“The Woman in Black 2: Angel of Death” was released as a combo pack with a BLu-ray and Digital HD copy. The 1080p transfer worked with the dark and dreary conditions. Like the first film, the shooting locations have that certain Hammer charm today and look great on Blu-ray. The DTS-HD Master Audio 5.1 tracks delivers everything that you would expect from a horror film.

Like the film itself, the special features are quite the let down as well. First off is “Pulling Back the Veil: The Woman in Black 2”, which includes behind-the-scenes footage with interviews mixed in. There is also “The Woman in Black 2: Chilling Locations”, which briefly looks into the shooting locations for the film. Lastly there is a deleted scene and trailer included.