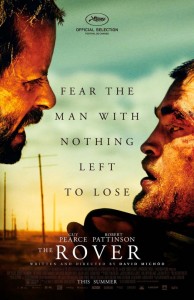 The Rover is best described by these words: bleak, gritty, dirty, sweaty, fly-covered, raw and terrific. Imagine if David Lynch re-wrote Dude, Where’s My Car?, and then teamed up with Darren Aronofsky to shoot it, choosing the Australian outback as their setting. That is what The Rover felt like to me.

I’ve always enjoyed the work of Guy Pearce, and I’ve never not liked Robert Pattinson; even with those sparkly-vampire flicks he was in. Pearce and Pattinson both turn in muted but daring performances. The story begins ten years after what is referred to as “the collapse”. The main character Eric (Pearce) stops off in a small, dilapidated town to get a drink; leaving his car parked outside. Speeding by in the opposite direction three men crash in their SUV and proceed to steals Eric’s car and continue on. Eric begins his pursuit to retrieve his car. And that is the entire premise for the movie. It is compelling and quite amazing.

Pattinson’s character, Rey, was originally part of the crew that stole Eric’s car, but was left for dead a few towns over. Rey eventually regains consciousness and travels to reunite with his counterparts. What follows is a series of bizarre encounters and starkly-beautiful scenery and locales. The pacing and structure of this movie is unlike anything an American filmmaker would do. A large majority of the action scenes were achieved in a very subdued and non-cinematic way. Shoot-outs are not done with several quick cuts, but in long takes with most of the action happening off-screen. Very daring, but also very effective.

This story isn’t told by elaborate camera-work or heavy exposition; it all lies within the performances of the characters. Each character, both Rey and Eric, have a motivation, and a dedication; even though we don’t discover what they are until the end — if at all. Pearce’s performance is superb. He is able to make the audience like him, and root for him, even though he is absolutely cold-blooded. At the same time, Pattinson creates a character unlike any that I have seen him do before. Rey, is a bit dim, or a “half-wit” as he is called. And while also being ruthless and cold, there is a strange warmth to him, that makes you want to see him succeed as well.

This film never gives any hints as to what is coming next in the story. It is nothing more than a series of unfortunate and bloody events. The Rover does not condescend to its audience and explain everything to you; while concurrently it is not trying to be clever and keep things a ambiguous. It asks you to tag along on a journey and promises to show you something you haven’t seen; while also giving you a clear feeling that if you don’t enjoy the adventure, the film could care less. The Rover is a great example of filmmaking that says you can be deep without having to be elaborate. I would be extremely surprised if this film receives a major release and does great business, since it’s too raw for most audiences; but it is fantastic. It is worth watching just for the performances. A pure example of great acting.