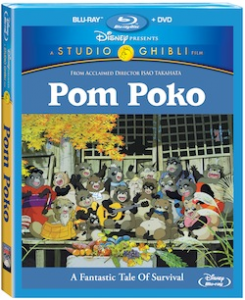 Thank God for Disney since they have been delivering fans of Studio Ghibli films with new Blu-ray ever few months. The following three beloved films have never been available before on Blu-ray in the US. They are POM POKO, PORCO ROSSO and TALES FROM EARTHSEA. These films are not the most notable films in Studio Ghibli’s library but they are still classics. They also come with all-new digital masters featuring HD picture and sound. Having seen POM POKO and PORCO ROSSO back when I was a kid on VHS tape, this was quite the different experience. Almost felt like a different movie. The colors are absolutely vibrant and each films is accompanied with a DTS-HD Master Audio 2.0 track for both their original Japanese and English dub tracks.

POM POKO is directed by Isao Takahata know for his work on “Grave of the Fireflies” and “Heidi: A Girl of the Alps”). PORCO ROSSO is directed by the king of Studio Ghibli, Hayao Miyazaki himself (“Spirited Away,” “Princess Mononoke”). Lastly TALES FROM EARTHSEA is directed by the son of the king, Goro Miyazaki, who also directed “From Up on Poppy Hill”. Like I said these are great films. Personally, I am really hoping my breath for my favorite Ghibli films including “Spirited Away” and “The Castle of Cagliostro” to head to US on Blu-ray but for now, these are a great addition to my Studio Ghibli collection.

POM POKO Official Premise: Studio Ghibli presents a film about the clash between modern civilization and the natural world from acclaimed director Isao Takahata. The raccoons of the Tama Hills are being forced from their homes by the rapid development of houses and shopping malls. As it becomes harder to find food and shelter, they decide to band together and fight back. The raccoons practice and perfect the ancient art of transformation until they are even able to appear as humans. In often hilarious ways, the raccoons use their powers to try to scare off the advance of civilization. But will it be enough? Or will the raccoons learn how to live in balance with the modern world? Celebrate the magic of the forest and the beauty of the creatures who live among us in “Pom Poko”—now on Disney Blu-ray for the first time ever. 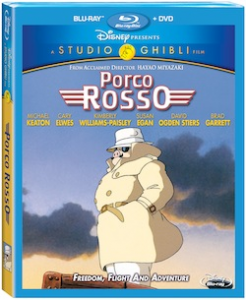 PORCO ROSSO Official Premise: Take flight with “Porco Rosso,” a valiant World War I flying ace! From tropical Adriatic settings to dazzling aerial maneuvers, this action-adventure from world-renowned animator Hayao Miyazaki is full of humor, courage and chivalry. When “Porco”—whose face has been trans- formed into that of a pig by a mysterious spell—infuriates a band of sky pirates with his aerial heroics, the pirates hire Curtis, a rival pilot, to get rid of him. On the ground, the two pilots compete for the affections of the beautiful Gina. But it’s in the air where the true battles are waged. Will our hero be victorious? For the first time ever on Disney Blu-ray, “Porco Rosso” is a thrilling ride you’ll never forget!

TALES FROM EARTHSEA Official Premise: An epic animated adventure directed by Goro Miyazaki, “Tales From Earthsea” features the voices of Timothy Dalton, Willem Dafoe, Cheech Marin and Mariska Hargitay. Based on the classic “Earthsea” fantasy book series by Ursula K. Le Guin, “Tales From Earthsea” is set in a mythical world filled with magic and bewitchment. In the land of Earthsea, crops are dwindling, dragons have reappeared and humanity is giving way to chaos. Journey with Lord Archmage Sparrowhawk, a master wizard, and Arren, a troubled young prince, on a tale of redemption and self-discovery as they search for the force behind the mysterious imbalance that threatens to destroy their world. Featuring a timeless story and magnificent hand-drawn animation, “Tales From Earthsea” is now available for the first time ever on Disney Blu-ray. 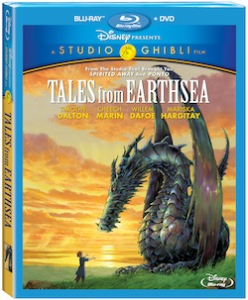 PORCO ROSSO does one up delivering an even better cast with Michael Keaton (“Batman,” “Toy Story 3”) as Porco Rosso, Cary Elwes (“The Princess Bride,” “Saw”) as Curtis, Kimberly Williams-Paisley (“According to Jim,” “Father of the Bride”) as Fio, Susan Egan (“Hercules,” “13 Going on 30”) as Gina, David Ogden Stiers (“Beauty and the Beast,” “Pocahontas,” and TV’s “M*A*S*H”) as Grandpa Piccolo and Brad Garrett (TV’s “Everybody Loves Raymond,” “Ratatouille,” “Finding Nemo”) as Mamma Aiuto Boss.

Lastly TALES FROM EARTHSEA does not disappoint either, especially including a former James Bond to the cast. For this we get the talents of Mariska Hargitay (“Law and Order: Special Victims,” “Leaving Las Vegas”) as Tenar, Willem Dafoe (“Spider-Man,” “Finding Nemo”) as Cob, Timothy Dalton (“The Living Daylights,” “License to Kill”) as Ged, Cheech Marin (“The Lion King,” “Nash Bridger”) as Hare.