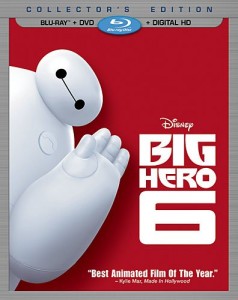 When I first saw “Big Hero 6”, I had high expectations from the film since Walt Disney Animation Studios has been really delivering some hits recently with “Frozen” and “Wreck-It Ralph”. After a few viewing though (and quickly becoming one of my daughters favorites) “Big Hero 6” and the lovable Baymax (voice of Scott Adsit) has won me over. This film won the Oscar last night for Best Animated Film and looking back on the year, I couldn’t agree more. I did love “The LEGO Movie” but all around this was the best animated film of the year.  If you haven’t seen this film yet, I highly suggest it since it will definitely will you over! Fist bump!

Official Premise: With all the heart and humor audiences expect from Walt Disney Animation Studios, “Big Hero 6” is an action-packed comedy adventure that introduces Baymax, a lovable, personal companion robot, who forms a special bond with robotics prodigy Hiro Hamada. When a devastating turn of events catapults them into the midst of a dangerous plot unfolding in the streets of San Fransokyo, Hiro turns to Baymax and his diverse group of friends — adrenaline junkie Go Go Tomago, neatnik Wasabi, chemistry whiz Honey Lemon and fanboy Fred — who transform into a band of unlikely heroes. Bring From Walt Disney Animation Studios (“Frozen,” “Wreck-It Ralph”), Disney’s “Big Hero 6” introduces you to a lovable robot who will change your world. Join Baymax (voice of Scott Adsit)home Disney’s “Big Hero 6,” featuring comic-book-style action and hilarious, unforgettable characters — it’s fun for the whole family!

Disney is releasing this film on a Collector’s Edition combo pack with Blu-ray + DVD + Digital Copy included. The 1080p transfer is beautiful but Disney is still slacking with neglecting to including a 3D Blu-ray of their films. I wish they would smarten up and start releasing 3D Blu-ray’s again. This film looked amazing in 3D and I would love to watch it in 3D again. Still though, I love the colors in this film, The DTS-HD Master Audio 7.1 track is outstanding. The action sounds amazing. Why Hiro and Bayamax are souring through the sky, it was a thing of beauty.

In terms of special features, Disney delivers here. First we have the Oscar Winning Theatrical Short “FEAST”. “The Origin Story of “Big Hero 6”: Hiro’s Journey” is hosted by Jamie Chung, voice of Go Go Tomago and takes us behind the scenes. “Big Animator 6: The Characters Behind the Characters” features the film lead animators talking about their creation. There are a few deleted scenes including two alternate openings with intros from Directors Don Hall & Chris Williams. There is also an Easter Egg included called “Big Hero Secrets” which tells you about the film’s secrets.