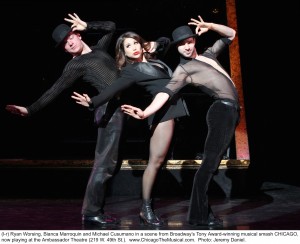 The term “Straight from Broadway” is often used when a popular show hits the road. But in the case of the touring production of “Chicago,” which opened at the Kauffman Center for the Performing Arts this week, it’s more than just an expression.

“Chicago” tells the story of two women, Roxie Hart (Bianca Marroquin) and Velma Kelly (Terra C. MacLeod), who are currently facing a day in court for murder. The married Roxie killed her lover, as did Velma. To make it interesting, Velma also killed the woman involved with her lover…her sister. Both have employed the smooth talking attorney Billy Flynn (John O’Hurley) to represent them. Let the fun begin!

Originally directed and choreographed by the late, great Bob Fosse, “Chicago” enjoyed a nice two-year run when it opened on Broadway in 1975. The show was nominated for 11 Tony Awards but won none, having opened the same year as the Pulitzer Prize-winning juggernaut called “A Chorus Line.” The show was revived on Broadway in 1996 and is STILL playing now, making it the 2nd longest running musical 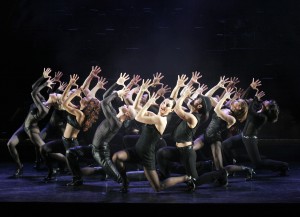 in Broadway history, behind “The Phantom of the Opera.” Featuring a brilliant musical score by Kansas City native John Kander and his lyric writing partner, Fred Ebb, the performance put on tonight was easily one of the best ever to play Kansas City.

The three leads are spot perfect in their performances. Both ladies have played their roles for quite a while and their familiarity with the characters makes their work seem effortless. The same with O’Hurley. Here’s where the “Straight from Broadway” comes in. Less than 48 hours before taking the stage tonight, Mr. O’Hurley was taking his final bows on the stage of the Ambassador Theater in New York City, where he just concluded a six-week run in “Chicago” on Broadway. His Billy Flynn is oily when he needs to be but also shows an unexpected bit of heart as well. The three are surrounded by a supporting cast that hits all the notes and nails all of the steps. I’m sure Bob Fosse was looking down and smiling tonight.

If your only knowledge of “Chicago” is the Oscar-winning film, I urge you to see it live on stage. You won’t be disappointed.

“Chicago” runs at the Kauffman Center for the Performing Arts through Sunday, January 25.