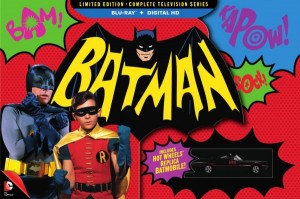 This POW-erful numbered limited-edition collection includes the 120 episodes scanned over 13 Blu-rays along with an Ultraviolet Digital HD copy of the series. These episodes looks absolutely stunning. For a show dating back to the 60’s, you would never guess that this was nearly 50 years old. The 1080p transfer for these episodes, remastered in high-definition, look amazing for this series. This show was always very colorful and the colors here are extremely vibrant and crisp. 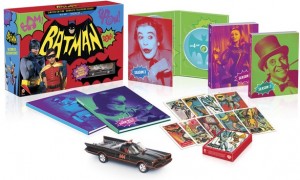 There are more than three hours of never-before-seen bonus content including interviews with both Adam West (as Batman) and Burt Ward (as Robin). “Hanging with Batman” is what it says just spending some time chatting with Adam West. “Holy Memorabilia Batman!” focuses on the world of collectibles for the series. “Batmania Born!” talks about building the series and the art and design behind it. “Bats of the Round Table” is a roundtable candid conversation with Adam West and his friends.