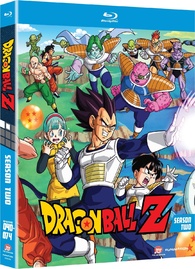 This is a very exciting Blu-ray release, actually, if you are a “Dragonball Z” fan. This is the first time ever that uncut Dragon Ball Z episodes are available on Blu-ray! This collection includes episodes 40-74 of this classic anime series fully remastered. This is a must own for any fan and real treat that these episodes are finally being a released. Dragonball Z: Season 3 Blu-ray is already slated to street on April 1, 2014, so like I said before I expect this series to be fully available by year end. Hopefully Funimation is planning a giant box set because that would be the ultimate release.

Official Premise: Having suffered heavy losses in the battle with the Saiyans, and with Goku still recovering from his injuries, the remaining Z-Fighters must embark on a perilous journey to Planet Namek in search of the Namekian Dragon Balls. Unbeknownst to them, however, a powerful new enemy has set his sights on the same prize—the ruthless tyrant Frieza!

These episodes are presented in 1080p high definition quality and 16:9 aspect ratio amd were restored using frame by frame, pan and scan technology. These episodes were given a lot of love from actual fans of the series and it shows in its release. There are three audio tracks included, which also have been re-mastered and have never sounded better. The English dub comes with an Dolby TrueHD 5.1 with the original Japanese music. The original English language broadcast version with the broadcast version music is presented with an Dolby TrueHD 2.0 track. Lastly the original Japanese track with the Japanese music, of course is delivered with a Dolby TrueHD Mono track.

This season stepped it up a bit from season one actually including some decent special features. “Inside Dragonball Z” is a two part interview series with Christopher R. Sabet and Sean Schemmel. There is a fun featurette called “Justin Cook Shares His Headshot Collection”. Then there are also the textless opening and closing songs, as well as trailers included. Lastly also like the first season, there is the ”Marathon Feature”. This allows you to view the episodes continuously without the credits each episode. This really adds a lot and makes it very easy to enjoy a great binge viewing experience of this amazing series.