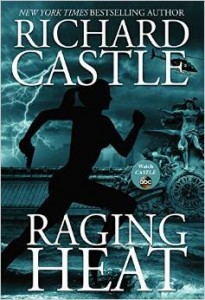 When I think about “Castle”, I always flash back to 2009, where the first season only had 10 episodes and a slim chance of getting renewed. Luckily ABC made the right now as the show is entering its seventh season already, which is a major accomplishment for a TV show. It also developed two fantastic book series around the shows fictional character, Nikki Heat and Derrick Storm. “Raging Heat” is the sixth book in the Nikki Heat series and seriously, I can’t believe it but this series is not slowing down at all. These books are fresh and each are literally unable to be put down once you start.

Official Synopsis: In New York Times Bestselling author Richard Castle’s newest novel, an illegal immigrant falls from the sky and NYPD Homicide Detective Nikki Heat’s investigation into his death quickly captures the imagination of her boyfriend the Pulitzer Prize-winning journalist, Jameson Rook. When he decides to work the case with Heat as his next big story, Nikki is at first happy to have him ride along. Yes, she must endure Rook’s usual wild conspiracy speculations and adolescent wisecracks, but after reuniting following his recent assignment abroad, she’s glad for the entertainment, the chance to bounce ideas, and just to be close to him again and feel the old spark rekindle. But when Rook’s inquiry concludes that Detective Heat has arrested the wrong man for the murder, everything changes.

I also just heard word that there are plans for a Derrick Storm spin-off series, I think that would be amazing. Hint hint though, don’t forget my girl now Nikki Heat, that would make a fantastic series as well. When you are reading these books, they really are so visual. I think that is since it comes from the writers of the TV series. They write it so well that they literally jump off the pages. After the cliffhanger of season six, I cannot wait to pick up with the next season in the next few weeks. What I also love about Richard Castle books is that I know that when each season ends we get a Derrick Storm book and when the season begins we get a new Nikki Heat book, so keep them coming guys!