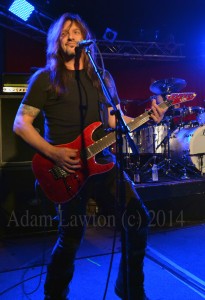 Dave “The Snake” Sabo is the guitarist for the hard rock/heavy metal band Skid Row who recently released the first of 3 EP’s titled “United World Rebellion Chapter 1”. With Chapter 2 set for an early August release and Chapter 3 slated for release in 2015 the band originally from Toms River, NJ shows no signs of slowing down anytime soon. Media Mikes recently had the pleasure of speaking with Snake about the bands current releases, his 28 yr writing/band partnership with bassist Rachel Boland and balancing the duties of being a guitarist and manager.

Adam Lawton: Can you give us some background on the second EP you have coming out and why you chose to release the album via 3 separate EP’s?
Snake Sabo: The music business is much more different now that it was through the better part of our career. We were raised on doing things a certain way in that you release a record of 12 or 14 songs and then you go out and tour for 2 years. For us that just doesn’t work anymore. We are living in an age of information overload. Things are being thrown at us at such a rapid basis that it’s hard to take it all in and navigate through the white noise. With the way music is being delivered these days we started to feel that maybe less is more. We figured we could hit people with a few songs, let them digest a bit and hopefully you have left them wanting more. Doing things this ways makes sense on a number of different levels. Economically we are able to keep costs down in the studio as we are only in there for about 2 weeks which is awesome. We can also keep the retail/download prices down as well. We aren’t asking the listeners to invest a lot of time or money in to something we are just hoping that we can provide them with something they can get off on and enjoy. We then do the whole process again 8 or 9 months down the line which gives us a steady stream of material being released. Things are very much in the moment because that’s how we are creating it. It is very fresh and pure and not convoluted in anyway. We didn’t go in and write 20 songs that we are just released over time we have written separately for each release so far. Things are working really well for us this way and it feels great. We are having a lot of fun. This new EP was probably the most fun I have ever had doing a Skid Row record. Rachel and I were pretty much on the same page the whole time and everyone in the band was galvanized. We dove head first in to this and no matter where something started it became all of ours in the end. It was really great to be a part of that.

AL: The new EP’s both seem to be quite a bit heavier than the bands 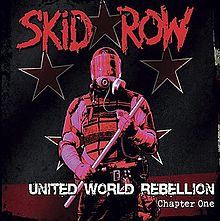 previous releases. Was this something you did consciously or did that happen more naturally?
SS: Things happened very naturally. We want to write the best songs we can within where are collective headspaces are at during that time. Things tend to start out with a conversation and from there we just follow things in to songwriting.  This time around we asked ourselves why we make music. It always comes back to it being the most pure form of expression for us even from the time we were teenagers. Music was and still is the great escape for us. We found that feeling again and got back to it. We noticed things really didn’t change from when we used to stand in front of the mirror dreaming we were Gene Simmons or Ace Frehley. Our problems might be different these days but things are just as impactful and dramatic as they were when we were 16. Music is our avenue for expression so we pealed back some layers of the onion to get to the heart of things again and that helped us realize what was going on. From there the light just kicked on and away we went.

AL: How has yours and Rachel’s writing relationship evolved over the years?
SS: I think we probably know each other better than anyone else in our lives. 28 years will do that. It’s one of those things where if we aren’t hanging out every day we are at least communication in some form or another. It’s very rare we go through a day without speaking. With all the life we have experienced together we just have a tremendous amount of respect for one another. We have each other’s backs regardless. When we are working and I come with an idea in my head and Rachel has a feeling in his heart we go with that feeling over the head every time. That’s not always the easiest thing to do but judgment wise it has always worked out in the end. It takes a lot of living life to get to that point with somebody. I am really proud we have been able to not only coexist but flourish in keeping Skid Row alive for 28 years now.

AL: What is it that appeals to you about putting out new music? And is it hard to introduce that new material being that you have such a well know back catalog?
SS: Sure it can be hard. You want to be self indulgent but at the same time people are paying money to see you play and you know they want to hear specific songs. I believe there is a way to make both sides happy. I am proud of everything we have ever done as a band. I have no problem playing “Youth Gone Wild” or a new song like “Kings of Demolition”. To me it is all cut from the same cloth so I can be upset if people want to hear one song more than another. I am thankful people want to listen and am very proud of that. We have been introducing some newer stuff and it has been going over well lately and it has been getting more than just a golf clap. The songs are infectious so you can’t help but bob your head to a song like “Kings”. When I go to 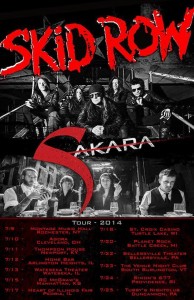 shows I find it exciting to hear new music. I remember seeing Soundgarden open up for Neil Young one time and they played the song “Spoon Man”. This was just before “Super Unknown” came out. I loved that song! I think about how that experience had an impact on me and I hope that our material will have the same impact.

AL: The band has been out since April touring. How far will this current tour run take the band?
SS: We are booked through mid December. We plan to take some time off for the holidays and we are talking about getting together sometime in January to start writing the 3rd EP. With the second EP coming out in August we want to go out and tour on that as well so by January it will have been out 4 or 5 months by then so we will probably want to tour some more in support of that. Our goal is to tour 6 to 8 months for each EP release. A lot will depend on how the releases are received by the public as well as with where are heads are at when we decide to sit down and start writing. As long as we are still having fun each night we will continue to be out there.

AL: You also manage bands. How do you go about balancing your duties for each project?
SS: I don’t know. (Laughs) I love working with the guys from Down and Vintage Trouble. Doing that almost balances everything out. At one point I’m out on the road doing shows and all that and then I get to step out of that roll and in to the role of manager where I still get to be involved in music but on a different level. It can be trying at time but technology has a wonderful way of keeping everyone connected. If I didn’t have that I don’t know what I would do.